The Death & Second Life of Morality 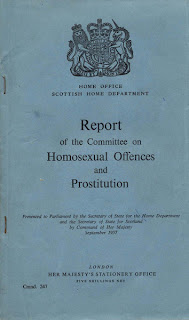 'Unless a deliberate attempt be made by society through the agency of the law to equate the sphere of crime with that of sin, there must remain a realm of private morality and immorality which is, in brief and crude terms, not the law’s business.'

The Wolfenden Report sparked a now-famous debate between legal philosopher H.L.A. Hart and Lord Patrick Devlin, a judge of the English High Court on just what was the law’s business.
► Could the law properly criminalise private sexual behaviour that caused no harm to others?
In the United Kingdom and other Council of Europe member states, following the 1981 decision of the European Court of Human Rights in Dudgeon v. United Kingdom, concerning the laws of Northern Ireland, the answer was no.
In the rest of the world, it remains an open question.
Public disapproval of private same-sex sexual behaviour – the morality justification – was considered a legitimate state objective in U.S.

federal courts until 2003, when the Supreme Court held in Lawrence v. Texas that public morality could not save Texas’ sodomy law.
In so doing, the Court overruled a 1986 precedent with roots in the Hart-Devlin debate. I examine these origins in an article published this year in the Amsterdam Law Forum, entitled "Morality Tales in Comparative Jurisprudence: What the Law Says About Sex." Scholars who've also contributed to this discussion include Western New England Law Professor Anne B. Goldstein, in her 1988 Yale Law Journal article entitled "History, Homosexuality and Political Values, Searching for the Hidden Determinants of Bowers v. Hardwick."

► The Hart-Devlin argument was alive and well when the Supreme Court of Zimbabwe heard a constitutional challenge to a law criminalizing private consensual sodomy. In Banana v. State (2000), the majority observed that “in many but not all parts of the western world” sodomy had drifted “from crime to sin to acceptable conduct.” The trend stopped in Zimbabwe. The court would be guided by the “social norms and values” of Zimbabweans about what to call a crime. Dissenting, Chief Justice Anthony Gubbay wrote that even if the majority of people found “acts of sodomy morally unacceptable, it did not mean that moral values alone can justify making an activity criminal.” In fact, quoting Ronald Dworkin, Taking Rights Seriously (1978), the chief justice argued that majoritarian moral views did not justify making conduct criminal.
Chief Justice Gubbay's dissent influenced the reasoning of the Hong Kong Court of Appeal when, in Secretary for Justice v. Yau Yuk Lung Zigo and Another (2006), it struck down a law criminalising “homosexual buggery” other than in private.

► The morals justification prevailed, however, in the case of Kanane v. State, decided by the Court of Appeal of Botswana in 2003. The court upheld the sodomy statute against constitutional attack, reasoning that public opinion did not require decriminalisation. It was a question for the legislature and “parliament must inevitably take a moral position in tune with what it perceives to be the public mood.”

Morals justifications rejected
All is not bleak.
Popular morality was rejected by the Constitutional Court of South Africa in National Coalition for Gay and Lesbian Equality v. Minister of Justice (1998) and the High Court of Delhi in Naz Foundation v. Union of India (2009).
Before and after its decision in Lawrence, the U.S. Supreme Court displayed discomfort with morals justifications and the judicial inquiry into illegitimate bias, as Suzanne B. Goldberg, Clinical Professor of Law and Director of the Center for Gender and Sexuality Law at Columbia, explained in her 2004 Minnesota Law Review article.
In South Africa and India, courts similarly viewed popular morality as masking animus. Both countries have transformative constitutional traditions, and both the National Coalition and the Naz Foundation decisions referred to national histories of subjugation and exclusion.

'It is no exaggeration to say that the success of the whole constitutional endeavour in South Africa will depend in large measures on how successfully sameness and difference are reconciled.'

The South African court determined that the morals justification for criminalizing same-sex sexual conduct rested “to a large extent on nothing more than prejudice.”

► In Naz Foundation, the Delhi High Court also dismissed the public morality argument in the course of ruling that Section 377 of the Indian Penal Code, a criminal prohibition on sexual activity "against the order of nature." The Delhi High Court stated that

'public animus and disgust toward a particular social group or vulnerable minority is not a valid ground for classification … Section 377 IPC targets the homosexual community as a class and is motivated by an animus towards this vulnerable class of people.'

According to the court, Section 377 was reminiscent of colonial-era legislation that had criminalized entire tribes.

Morals justifications re-formed
But it is not the end of all morals justifications.
The South African and Indian courts discarded moral disapproval, but affirmed instead a broader vision of the common good, defined as constitutional morality. Thus the Delhi High Court stated in Naz Foundation:

'In our scheme of things, constitutional morality must outweigh the argument of public morality, even if it be the majoritarian view.'

The South African court in National Coalition likewise recalled the “deep political morality” of the Bill of Rights. Central to the court's vision of constitutional morality were the norms of equality and non-discrimination.
There are echoes here of both U.S. Supreme Court Justice Anthony Kennedy’s opinion for the Court in Romer v. Evans (1996) and Justice Sandra Day O’Connor’s concurrence in Lawrence.

'grave concern at acts of violence and discrimination … committed against individuals because of their sexual orientation and gender identity.'

The resolution passed by a vote of 23-19.
The “morality” of laws criminalizing people on the basis of their sexual conduct is still very much up for debate. The question now is:
► Which kind of morality will prevail?