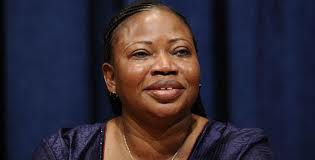 It is IntLawGrrls' immense honor to welcome Fatou Bensouda (left) as today's very special guest blogger.
Fatou is the Prosecutor-Elect of the International Criminal Court, by vote this past Monday of the ICC Assembly of States Parties, meeting through new week at U.N. headquarters in New York. (AFP photo credit)
As readers of our prior posts well know, Fatou's served as the ICC's Deputy Prosecutor since 2004. There she's led investigations and field missions, and has been in the courtroom and on the briefs of the Office of the Prosecutor. And, as posted, she's widely spoken and published on the work of that office.
She's a native of Gambia, where she practiced as a maritime law expert and as general manager of a major bank before entering national public service. Positions included Solicitor General and Minister of Justice of Gambia, and Gambian delegate at U.N. crime prevention conferences, at African regional meetings, and, in the early days of the ICC, at meetings of its Preparatory Commission. She served as a prosecutor at the International Criminal Tribunal for Rwanda before moving to the ICC.
Fatou contributes as her IntLawGrrls guest post below the text of the speech she gave Monday to the Assembly. It begins by addressing: that body's newly elected Madam President, Tiina Intelmann of Estonia; President Seretse Khama of Botswana, who spoke of his country's strong support for the ICC in a speech on the same day; the assembled Excellencies; and, finally, the Assembly as a whole. Fatou delivered a portion of her address in French; for the benefit of our non-francophone readers, we've published our own, unofficial translation of that passage in a post further below.

All of us IntLawGrrls are proud to extend our Heartfelt welcome, Fatou!