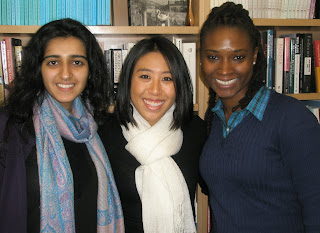 It's IntLawGrrls' great pleasure to welcome the three women in the photo at right: Saira Hussain (left), Peggy Li (center), and Shayla Johnson (right). Second-year law students, all three are interns in the International Human Rights Law Clinic at the University of California, Berkeley, School of Law.
► Saira moved to the United States from her country of birth, Pakistan, when she was 3. She's lived in the San Francisco Bay Area ever since, and earned a B.A. in Public Health, with a Minor in Spanish, from California-Berkeley before entering law school.
► Peggy, a native of San Francisco, graduated from the University of California, Los Angeles, with a B.A. in Communication Studies.
► Shayla, who was born in Orlando, Florida, is a graduate of Howard University in Washington, D.C., where she majored in International Business and Emerging Nations.
All three contributed to Victims’ Right to Remedy: Awarding Meaningful Reparations at the ECCC (2011), a report jointly issued last month by Berkeley's International Human Rights Law Clinic, along with Access to Justice Asia, based in Singapore, and the San Francisco-based Center for Justice & Accountability.
Supervising Saira, Peggy, and Shayla was our colleague, Laurel E. Fletcher, Clinical Professor Law and Director of International Human Rights Law Clinic at Berkeley Law.
Released to coincide with the start of trial in Case 002, the Victims’ Remedy report recommended ways the ECCC, the Extraordinary Chambers in the Courts of Cambodia, might adapt its procedures to grant redress in line with international practice. In their guest post below, Saira, Peggy, and Shayla discuss key features of the report. 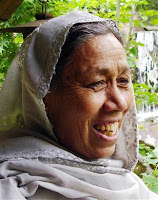 The three dedicate their work to Safia Ahmed-jan (left), who was born into a poor family in Afghanistan in 1941. A onetime teacher and high school principal, she campaigned for women's rights after the Taliban regime was toppled. Ahmed-jan served as provincial director of the Ministry of Women’s Affairs in Kandahar province for five years, until September 25, 2006, when "suspected Taliban gunmen" rode a motorcycle past her house and shot her to death. (credit for undated Reuters photo by Ahmad Masood)
Today Ahmed-jan joins other IntLawGrrls foremothers in our list at right.
Heartfelt welcome!