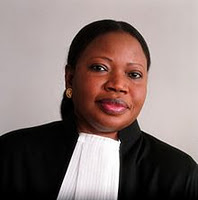 Fatou Bensouda will be the next Prosecutor of the International Criminal Court.
A flurry of items confirmed this news overnight. As reported by Edith Lederer of the Associated Press, Ambassador Christian Wenaweser, President of the Assembly of States Parties,

said that at an informal meeting of the 119 countries on Thursday, he will ask that Bensouda be formally elected by the Assembly when it opens its annual meeting at U.N. headquarters on Dec. 12. She would become the second chief prosecutor and the first woman to hold one of the world's top legal posts.

As detailed in our prior posts and in this entry, Bensouda has served as the ICC's Deputy Prosecutor since 2004, having earlier been a prosecutor at the International Criminal Tribunal for Rwanda. (credit for above left photo)
Born in Banjul, Gambia, on January 31, 1961, she practiced law as a maritime expert (she holds a master's in International Maritime Law and the Law of the Sea, as well as a law degree earned in Nigeria) and as general manager of a major bank. From 1987 to 2000, she held a number of national posts, including Solicitor General and Minister of Justice of Gambia. Bensouda served as a delegate at U.N. crime prevention conferences, at human rights meetings of the precursor to the African Union, and at meetings of the ICC Preparatory Commission.
And she helped to negotiate founding charters of ECOWAS, the 15-member Economic Community of West African States. That experience no doubt has informed missions she's led for the Office of the Prosecutor -- including ones in the West African states of Guinea, which the ICC prosecutor's office is monitoring, and of Côte d'Ivoire (June 2011 video below), whose former President just spent his 1st full night in an ICC jail.

Bensouda's background also gives special weight to her standard response, on behalf of the ICC, to the oft-voiced contention that the court should lay off Africa:

'We say that ICC is targeting Africans, but all of the victims in our cases in Africa are African victims. They are not from another continent. And they're the ones who are suffering these crimes.
'Now if you are telling me that, if we have those referrals from these states, we should say 'we won't go there because they are African states', I am sorry, we will not do that.
'Why don't we look at the positive side? Why don't we look at the fact that African leaders are taking leadership in international criminal justice?'