(From IntLawGrrls alumna Laurie Blank, this guest post, in tribute to a departed colleague) 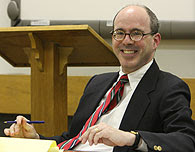 Earlier this week, the Emory Law community and the international law community lost a wonderful scholar, teacher and friend. Professor David J. Bederman, the K.H. Gyr Professor of Private International Law, died on Sunday after a long and courageous battle with cancer. He will be sorely missed.
David taught here at Emory Law School for 20 years, teaching a wide range of courses, including international law, constitutional law, torts, admiralty law, Roman law, law of international common spaces, international institutions and foreign relations power. Throughout this time, David remained integrally involved in the practice of international law as well, on issues such as sovereign immunity, marine exploration and the law of Antarctica, and he argued several cases before the U.S. Supreme Court. (credit for 2009 photo of David at Emory moot for a Court argument)
Most notably, we will all remember David for his remarkable ability to combine breadth and depth in the practice, teaching and study of law, to have an extraordinary grasp of so many legal areas, both mainstream and more arcane. As our Interim Dean Robert Schapiro wrote of David,

'Those of you who had the privilege of knowing David know that his mind held an enviable balance: a storehouse of legal history coupled with a capacity to explore innumerable questions ranging from how custom provides the basis for law to who rightfully owned the lost personal artifacts of the H.M.S. Titanic.'

Privately he did so much for many of us on an individual level while entering the discipline. Publicly, he did so much for the discipline as a whole. At 50, he really he had the lifetime intellectual output of someone twenty years older, with such a wide range of experience: starting out with the US-Iran Tribunal, Ancient International Legal History, Comparative Law, an active litigation practice (e.g. the Titanic), Spirit of International Law. After Tom Franck gone, he really was the last of the American PIL generalists, and he proudly considered himself to be one too. My favorite article of his was the one that riffed on David Byrne's "Why I Hate World Music." Such a sad loss. Gone too soon. - Prof. Vik Kanwar (New Delhi, India)