In Seychelles, in pursuit of pirates 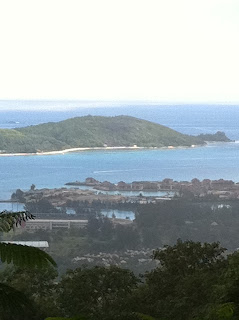 VICTORIA – Greetings from the Seychelles!
Along with Professor Michael Scharf of Case Western Reserve University School of Law and Sandra Hodgkinson, Distinguished Visiting Research Fellow at National Defense University, this week I have been engaged in meetings with the Seychelles’ Attorney General and members of the judiciary about the ongoing Somali pirate prosecutions in the Seychelles’ courts.
Mike, Sandy, and I form a delegation representing the Public International Law & Policy Group, a Washington, D.C.-based global pro bono organization. (pictured below, Sandy, left, and I outside The Pirate Arms)
PILPG recently began work in the area of Somali piracy, through the creation of its Piracy Working Group. Mike, Sandy, and I, along with a number of other distinguished academics, practitioners, and conflict resolution experts, are all members of a High-Level Expert Group, and we have traveled to the Seychelles with a two-fold mission:
► First, we have presented the Seychelles’ Attorney General, Ronny Govinden, with copies of eighteen legal memoranda, addressing various legal issues related to Somali piracy.

The memoranda have been written by law firm associates and law students who work for law firms and legal institutions which form the Expert Group’s consortium of academic partners. In fact, since its inception in May 2011, the Expert Group has identified pertinent legal issues related to Somali piracy, and has outsourced the research and writing of legal memoranda on such topics to our law firm and academic partners.
Thus, here in the Seychelles, we have officially entrusted this tiny nation’s prosecutors with the fruit of our research. It is our hope that the legal memoranda will prove useful in the short future, as several Somali pirates already have been prosecuted, and additional pirates are awaiting trial in the Seychelles’ domestic courts.
The legal topics covered by the memoranda range widely – from basic issues, such as the applicability of 1982 U.N. Convention on the Law of the Sea and customary law to piracy incidents off the coast of Somalia, to more specialized discussions on, for example, relevant international regimes related to the freezing both of piracy financiers' assets and of financial gains derived from piracy.
► Second, we reached an oral agreement with the Attorney General through which his office will establish a long-term cooperation and collaboration relationship with PILPG. Mainly, the Attorney General’s office will continue to request legal memoranda from PILPG on various piracy topics, as they arise in future prosecutions.
The Attorney General was able to identify several new topics of interest during our meeting, and he was very enthusiastic about the prospect of future collaboration, which would tremendously strengthen ongoing piracy prosecutions. The Attorney General’s office has a small staff and limited resources; thus, any research assistance by PILPG will be immensely valuable toward supporting piracy prosecution.
It is becoming obvious that the Seychelles’ government is a key player in the global fight against Somali piracy, and that Seychelles’ national courts are an appropriate venue for pirate prosecutions.
Until recently, as discussed in prior IntLawGrrls posts on piracy available here, captured Somali pirates were routinely released because of a lack of viable prosecution options. Major maritime nations which patrol the Gulf of Aden and other waters in the Indian Ocean seem uninterested in prosecuting captured Somali pirates, in their domestic courts, on a true universal jurisdiction model. Piracy prosecutions are logistically difficult, politically unpopular, financially costly, and may even ultimately result in the prosecuting country’s obligation to grant pirates political asylum upon the completion of their prison sentence. Thus, unless national interests of such maritime nations are directly threatened by a piracy incident, major maritime powers are generally not prone to setting up domestic piracy trials.
Over the last few years, Kenya has been identified as a stable regional partner, capable of conducting fair pirate prosecutions in a specialized domestic court in Mombasa. Thus, several countries concluded transfer agreements with Kenya, whereby Kenya would prosecute Somali pirates upon their transfer by the capturing state to Kenyan authorities. Alas, Kenya seems ambivalent about the prospect of accepting more Somali pirates in the future – the Kenyan authorities have indicated that they no longer wish to participate in such transfer programs. While more than a hundred Somali pirates await trial in Mombasa, Kenyan authorities suggested that no additional pirates will be transferred to Kenya in the future. While there are reports that Kenya may revert to its original position of willingness to prosecute pirates, nobody is certain as to what the Kenyan government will ultimately decide.

Hence the need to identify another stable regional partner, like the Seychelles.
The Seychelles are a group of relatively small islands in the Indian Ocean. (map credit) While not in direct proximity of Somalia, the Seychelles have nonetheless been negatively influenced by the development of piracy in this region. Pirate attacks have intensified and proliferated geographically, and Somali pirates have attacked boats and yachts sailing close to the Seychelles’ waters. 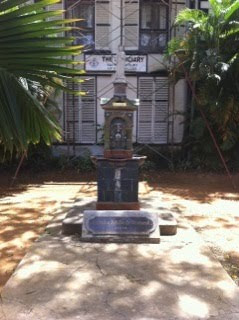 Eleven successful piracy trials have already taken place, and 51 pirates have been convicted in the Seychelles’ courts. Several other pirates are currently detained and awaiting trial.
Finally, we ended our visit with a meeting with two members of the Seychelles’ judiciary. One of these two judges, Seychelles Supreme Court Justice Duncan Gaswaga, head of that Court's Criminal Division, has presided over several piracy trials, and was kind enough to show us two courtrooms which are currently being used for piracy prosecutions. (at left, front of Supreme Court, among the oldest

buildings on Mahé, the Seychelles' largest island, on which is located the capital, Victoria; and Mike Scharf and I at the Court)
We explored the possibility of future assistance by PILPG to the Seychelles’ judiciary, in the form of amicus briefs or other research memoranda useful to support judges in their efforts to preside over piracy trials.
The trip was successful, and it will be my pleasure to report more on the topic of Somali piracy upon my return to the United States.