New Book is a "Game Changer"

Today, I'd like to "blag" (half-blog/half-brag) about an incredible new book by IntLawGrrls Fionnuala Ní Aoláin, Dina Francesca Haynes, and Naomi Cahn, entitled "On the Frontlines: Gender, War, and Post-Conflict Process." The book, recently published by Oxford University Press, is remarkably compelling and likely to have a significant impact on the way that scholars and activists working in post-conflict societies conceive of their fundamental mission. Several key themes provide a conceptual anchor throughout the book. These include: (1) the notion of gender centrality as a more effective and compelling alternative to gender mainstreaming; (2) the relevant international norms and the extent to which they have been successful in addressing the gendered aspects of post-conflict processes; (3) the importance of consulting with local populations, and with women in particular, before advancing any post-conflict agenda; and (4) the inadequacy of focusing disproportionately on civil and political rights, whether through accountability mechanisms, rule of law initiatives, or other avenues, to the exclusion of socio-economic rights and needs. The authors deftly weave these themes throughout the book in a way that guides the reader through a complex and persuasive analysis.
In developing these themes, the authors frequently question the c

onventional wisdom in the field. This provocative engagement with and thoughtful critique of current norms makes the book an invaluable contribution to the literature. Throughout the book, the authors discuss legal and other initiatives that were designed to facilitate the recovery of societies emerging from conflict. The authors acknowledge the contributions of such initiatives but consistently question their effectiveness. Time and again, they pose the critical questions: "Does it really work? And does it work for women?"
One particularly important theoretical insight (and there are many) stems from the authors' resistance to gender essentialism. Women's victim-status has dominated the post-conflict literature in ways that often reinforce gender essentialism. In some ways, this is unde 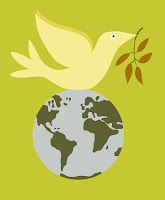 rstandable given the gendered nature of sexual harms suffered by women in areas of armed conflict. The analysis, however, must extend beyond victim-status to engage questions of women's participation in conflict and their involvement in the recovery effort. The authors' approach reinforces the complexity of women's experiences before, during, and after conflict.
I loved this book. It's a "game changer;" read it when you have a chance.

Thanks for this helpful post! I've linked to it over on my new book blog, where IntLawGrrls is essential reading: http://wartimebook.blogspot.com/2011/12/on-frontlines-gender-war-and-post.html