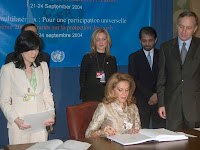 On this day in ...
... 1983, the Convention on Prohibitions or Restrictions on the Use of Certain Conventional Weapons Which May be Deemed to be Excessively Injurious or to Have Indiscriminate Effects, which had been adopted in Geneva, Switzerland, on October 10, 1980, entered into force. This Conventional Weapons Convention, about which we posted earlier this week in connection with cluster munitions, operates as an umbrella treaty for a number of protocols annexed to it. States must join at least 2 of the latter to be members of the overall treaty. To date the treaty has 114 states parties, including, as of 1995, the United States. (credit for 2004 U.N. photo depicting Paraguay's joinder by signature of its Minister of Foreign Affairs, Leila Rachid de Cowles)