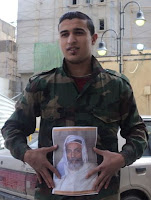 On this day in ...
... 1951 (60 years ago today), a former Italian colony in North Africa, Libya, declared independence. Thus it became "the first country to achieve independence through the United Nations and one of the first former European possessions in Africa to gain independence." King Idris ruled the country as a monarchy until September 1, 1969, when a then-28-year-old military officer, Muammar el-Qaddafi, seized power in a bloodless coup. What happened after that? See here. (credit for February 2011 of member of Benghazi opposition holding photo of the late King Idris)