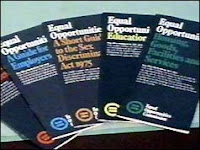 ... 1975, not coincidentally International Women's Year, what the BBC then called "[r]adical new legislation" entered into force in Britain. The revolutionary acts? Anti-sex-discrimination and pro-equal-pay statutes that "introduc[ed] a woman's right to equal pay and status in the workplace," by aiming to "prevent women being paid less than their male counterparts." (photo credit) Though "a culture shock to many" mat the time, a quarter-century later, "a survey showed the Acts had helped close the pay difference in the gender gap from 40% less than male counterparts, to 20%."