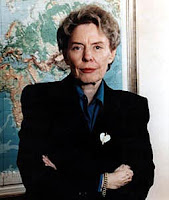 On this day in ...
... 2006 (5 years ago today), Dr. Jeane J. Kirkpatrick (left) died at her home in Bethesda, Maryland, 80 years after she'd been born into an oil wildcatting family in Duncan, Oklahoma. (photo credit) Following a brief stint in the State Department, she earned her doctorate at Columbia University in 1968, a year after she'd joined Georgetown University's political science faculty. Initially she was a member of the Democratic Party. But by the time President Ronald Reagan was elected Kirkpatrick was a neoconservative. She would enjoy what The Guardian termed "an extraordinary rise" in the U.S. foreign policy establishment. According to her New York Times obituary:

Ms. Kirkpatrick was the first American woman to serve as United Nations ambassador. She was the only woman, and the only Democrat, in President Ronald Reagan’s National Security Council. No woman had ever been so close to the center of presidential power without actually residing in the White House.