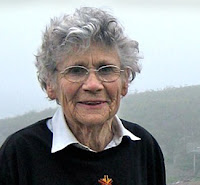 On this day in ...
... 1923, in Yonkers, New York, a daughter was born to parents who were newspaper and magazine journalists. Given the name Barbara Peabody Swift but known as Kate Swift (left), the daughter herself earned a journalism degree from the University of North Carolina, and after a brief stint at NBC News, enlisted in the Women’s Army Corps, serving in the information and education department. She continued as a writer/editor after World War II. In 1970, Swift and her partner, Casey Miller, were asked to copyedit a sex education manual for junior high school students, and concluded in the course of the project that the use of what once were termed "gender-neutral" pronouns -- for instance, "he" to mean "he and she" -- helped keep women in a 2dary social place. Swift and Miller challenged the usage in “Desexing the English Language” (1972), their essay published in the very 1st issue of Ms. magazine. In it and other works the couple urged reformation of the English language. (Swift's other activities included support for marriage equality and participation in the Beijing Conference on women's rights as human rights.) According to the obituary that appeared in The New York Times when Swift died this past May, at age 87:

'Some of the authors' proposals gained traction. Many newspapers, textbooks and public speakers avoid "fireman" and "stewardess" nowadays. Other ideas fell by the wayside, notably "genkind" as a replacement for "mankind," or "tey," "ter" and "tem" as sex-neutral substitutes for "he/she," "his/her" and "him/her."'