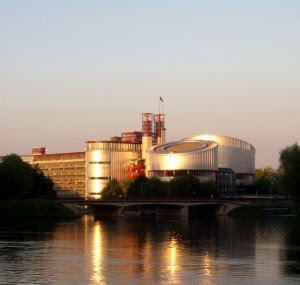 The European Court of Human Rights (right) is drowning in applications.
With 140,000 applications pending at the close of 2010, the Court has had to face an avalanche of documents. (Four party states – Russia, Turkey, Romania, and Ukraine – account for approximately one-half of the Court’s docket.) (photo credit)
The overwhelming number of applications before the Court led to adoption, in early 2010, of the Interlaken Declaration.
As IntLawGrrl Fiona de Londras then posted, the Declaration stressed the principle of subsidiarity, which has long served as the mechanism for managing the intersection of international pluralism and the protection of fundamental rights by making nations the primary enforcers of Convention rights. While the Court is ready to step in when states fail to carry out their responsibility, the onus remains with the national authorities to guarantee the ends of the Convention within the relevant national context.
However,the recent decisions from the Court – M.S.S.v. Belgium and Greece, issued at the very beginning of this year, and Mandić and Jović v. Slovenia (judgment available here) handed down in October – have the effect of sidestepping the exhaustion requirement. This effect is the result of the Court's combination of rights guaranteed in two provisions of the European Convention on Human Rights:
► Article 3, which bans torture or inhuman and degrading treatment; and
► Article 13, which ensures the right to an effective remedy. (Bulgaria, Greece, Russia, Turkey, and Ukraine are most likely to influence the Court’s evolving jurisprudence on Article 13.)
The Court's move intertwines the fundamental nature of the substantive Article 3 rights with the structural mechanism for its enforcement. Given the emphasis on subsidiarity and the logic behind the longterm reduction in the Court’s docket, this novel application of the Article 13 effective remedy guarantee, in conjunction with Article 3's ban on torture or inhuman and degrading treatment, suggests an ineffective “one-step-forward-two-steps-back”approach. If applicants continue to bring cases straight to the without first going through the national authorities, the forecast for the Court’s docket remains bleak.
Article 13 states in full:

Everyone whose rights and freedoms as set forth in this Convention are violated shall have an effective remedy before a national authority notwithstanding that the violation has been committed by persons acting in an official capacity.

In Mandić and Jović v. Slovenia, the Court had to interpret the scope of this provision with respect to prison conditions in Article 26, which states that the Court "may only deal with the matter after all domestic remedies have been exhausted."
This is an argument repeatedly used by respondent states when they claim inadmissibility on the basis that the applicant failed to exhaust domestic remedies.
The applicants in Mandić and Jović v. Slovenia had been held on remand in for several months from 2009 to 2010. The applicants did not go through the relevant state authorities to challenge the conditions of their detention – including overcrowding – under Article 3 of the Convention. Instead, their inhuman or degrading treatment claims were taken directly to the and analyzed in conjunction with the effective remedy guarantee of Article 13.
The Court concluded that given the lack of domestic remedies, as well as the serious nature of the violation, had failed to provide a system of review that could lead to a favorable legal outcome for the applicants or result in a real change in the condition of confinement.
The decision did not address the requirement that make an independent, domestic determination of whether there was a violation prior to the Court’s exercise of its jurisdiction. In fact, the, Court held, at ¶ 55,

that the question whether the requirement that the applicants must exhaust domestic remedies has been satisfied in the instant case is closely linked to the complaint concerning the existence of an effective remedy within the meaning of Article 13 of the Convention.

This case marks a progression from the January 2011 Grand Chamber decision in M.S.S. v. Belgium and Greece.
This latter case concerned the inadequacy of asylum proceedings for a citizen of who alleged that he would face the threat of torture and inhuman treatment if returned to his country of origin.
At ¶ 298 of its decision, the Grand Chamber of the European Court highlighted the responsibility of Greek authorities to determine the possibility of threat of torture and inhuman treatment faced by asylum seekers.
Notably, the Court stepped in to guard against asylum-proceeding arbitrariness, borne out of procedural failures. As a concurring opinion pointed out, the Court had found an “arguable” application of the Article 3 ban on torture or inhuman and degrading treatment, but had refused to make an independent determination whether the application fulfilled the admissibility requirements of the Convention.
Instead, as explained in the concurring opinion of Judge Mark Villiger, the opinion examined Article 3 claims only together with Article 13 of the Convention." He added:

'For, if the complaint is ‘arguable’ under Article 3 . . . surely it should first be examined under this provision, and only subsequently – if an additional complaint is raised about insufficient remedies – also under Article 13 of the Convention.'

In other words, if examined separately, the requirement of exhaustion mandates the applicant to seek redress through the domestic system; only then can a claim be brought before the European Court.
The decision in Mandić could undermine the principle of subsidiarity through the use of Article 13, on effective remedy, as a means of sidestepping domestic proceedings. More than merely finding a lack of procedural avenues for seeking redress, the Court in Mandić found that the absence of a specific substantive remedy to solve the overcrowding problem in Slovenian prisons amounted to a lack of an effective remedy.
Article 13, along with two other European Convention provisions – Article 35, the exhaustion of domestic remedies provision, and Article 1, which imposes an obligation to respect human rights – have served as one of the pillars for the subsidiarity principle. Now, one of those pillars is being used as a tool to undermine this central principle.
The evolving debate raises deeper questions about the Court’s reach and effectiveness: How effective can the Court be in managing a systemic overhaul of national prisons?
There is a difference in directing changes in the legal procedures for national protection of convention rights versus taking the reins on establishing the substantive policy of the state.
The principle of subsidiarity serves to protect legal and cultural pluralism by entrusting the national authorities with protecting human rights within the context of specific national circumstances. The recent move by the Court may frustrate the ability of each nation to tackle the increasingly complex intersections of pluralism, public resources, human rights, and criminal justice.
by Nino Guruli at 5:20 AM