Why every human rights advocate should know a little international law

(Thank you to IntLawGrrls, and in particular to Beth Van Schaack, for the opportunity to contribute this guest post, Part 1 of a 2-part series on effective human rights advocacy; Part 2 is here)

International law is a powerful tool for the protection of human rights. The law and the bodies that enforce it can provide real redress for victims of human rights abuses, build bridges between communities facing similar harms, bolster arguments for accountability, and mandate reforms. Though the regional and thematic treaty-based nature of human rights mechanisms may lead to some fragmentation or inconsistencies in the development of substantive rights, individuals and nongovernmental organizations’ thoughtful engagement with such mechanisms can yield profound results; for example:
► Vindication for the individual, as in this judgment from the European Court of Human Rights;
► A new beginning for the individual's community, as in this case from the Inter-American Court of Human Rights; and
► Landmark policy change for the individual's country, as in this matter before the Inter-American Commission on Human Rights.

In January of this year, I founded the International Justice Resource Center, a nongovernmental organization aimed at furthering such achievements -- in particular, helping human rights advocates know more about, and thus make better use of, international law.
IJRC is a global, user-oriented platform aimed at connecting grassroots human rights advocates with an underutilized, but powerful set of tools: international law and supranational human rights mechanisms. IJRC administers an online hub, tailored trainings and advocacy support, with the goal of democratizing understanding of and access to the range of international human rights norms and the bodies charged with their promotion and protection.
Based in Boston, Massachusetts, IJRC already has trained advocates working in various regions of the world, and responded to requests for advice from California to Kyrgyzstan. IJRC is also building an online platform where visitors can seek assistance, engage with one another, and access practical, user-friendly resources, such as instructional videos and manuals. No matter the issue they are facing or the country in which they work, advocates will be able to gain actionable knowledge of the standards and bodies relevant to their litigation, reporting, advocacy, or public education campaigns.
This past Wednesday, IJRC hosted Boston Human Rights Night, which brought together members of the academic, social justice, and legal communities to learn about one another’s work and explore the opportunities that international law presents for enhanced human rights promotion. The evening was also the culminating celebration of Campaign 501, which wraps up tomorrow.
At the Human Rights Night, an expert panel provided concrete examples from their work in the United States and abroad, allowing participants to take away a fuller understanding of the relevance of international law to social justice advocacy in the United States. 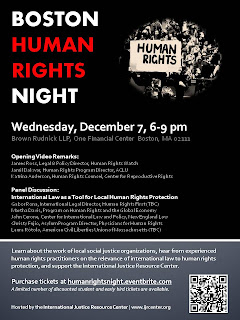 As panelists detailed, persons seeking improvement of – or accountability for – human rights conditions in the United States can:
► Prepare shadow reports for the expert bodies monitoring compliance with the International Convention on the Elimination of All Forms of Racial Discrimination, the International Covenant on Civil and Political Rights, and Convention Against Torture and Other Forms of Cruel, Inhuman and Degrading Treatment;
► Engage with the Human Rights Council thematic special procedures’ factfinding and reporting activities or seek the body's intervention on specific human rights violations;
► Submit information for consideration by the U.N. Human Rights Council as part of its Universal Periodic Review process;
► Make specific allegations of human rights violations through the Human Rights Council complaints procedure; and
► Submit individual complaints to the Inter-American Commission on Human Rights, and furthermore, participate in that body’s thematic hearings and rapporteurs’ activities.
In addition, many international bodies are empowered to intervene and urge or order state action where the life or security of a person or the object of the litigation is at immediate risk of irreparable harm. These means of engagement do not include still another avenue: advocacy around and engagement with the work of the political organs of intergovernmental organizations.
Unfotunately, as I will discuss in Part 2, the post that will appear tomorrow, Human Rights Day 2011, there remains a gap between the availability and use of such international law resources.