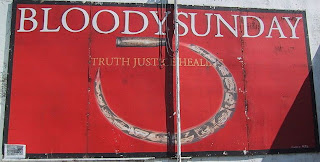 The events of January 30th 1972 uniquely shaped the Northern Ireland conflict. The loss of life and injury, the failure of the state to investigate adequately, with the continued denial of state accountability created a deep reservoir of hurt within bereaved families and the community. (credit for 2005 photo of mural in Derry)
Today marks the 40th anniversary of the events on the streets of Derry, and the images that riveted the world and in part defined the course of the conflict for decades thereafter.
Bloody Sunday was a mirror held up to the state’s own rhetoric of rule of law and democratic participation. The state was found wanting.
Following years of legal and political struggle to vindicate the innocence of 13 persons killed during the civil rights protest that day (and another who died later from injuries), the report by the Hon Lord Saville of Newdigate was released on June 15th 2010 to their families and to a watchful local and global community. The Report of the Bloody Sunday Inquiry spanned 10 volumes. As I posted at the time of its release last year, the report was unequivocal that the deaths were “unjustified and unjustifiable” and that all those shot were innocent civilians who had given no cause for the use of force again them by members of the British paratroop regiment.
Forty years on provides a space for reflection and for pause. What have we learned and what can the experience of Bloody Sunday teach?
Bloody Sunday was a traumatic and politicizing experience for many in the jurisdiction. Yet, it did not produce paralysis. Rather, family members, relatives, and community became deeply involved in the process of naming the state’s failure and sought to hold the state accountable for the murder of its own citizens. 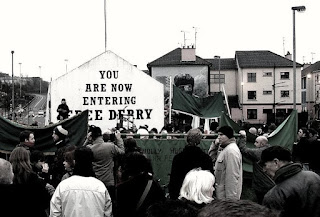 It is easy with the Saville Report in hand to forget the costs of mobilization. The yearly march in Derry on January 30th was a symbolic reenactment of the state’s failure, its silence, and its complicity. (credit for photo from 35th anniversary march) Families and activists involved in remembering and in challenging were themselves marginalized and stigmatized – the words ‘terrorist’ and ‘fellow-traveler’ easily thrown about over decades. The events of Bloody Sunday produced and sustained compounded harms which are not undone overnight.
One lesson then is that patience, community solidarity, and some rule of law within which to frame the claims made are essential to success when the state operates in consistent denial.
Another is that we should not over-estimate the healing and reconciliation that legal documents produce. We should remain attuned to the long-term and difficult work on the personal and communal level that remains to be done – the chilly reality of living in a transitional society once the media has moved on.
Bloody Sunday also demonstrates the particular challenges for democratic states in acknowledging their responsibility for systematic human rights violations.
Transitional justice theorists and practitioners mostly assume that democratic states do a better job than their authoritarian counterparts in tackling accountability. This should not be taken for granted. Often the democratic state (here the British government in Northern Ireland) persists with the self-promoting myth of neutrality, and is unable to ‘see’ its own liability for human rights violations. Bloody Sunday is a classic illustration of the failure of the democratic state, unable and unwilling to see itself as perpetrator and reluctant to fully apply its rule-of-law maxims to its own agents.
On one view, the Saville inquiry can be seen as the state finally and fully making amends. However, the role of the state in systematic and sustained human rights violations throughout the conflict did not begin and end with Bloody Sunday.
One cynical reading of the Saville inquiry is the conclusion that the state fully acknowledged the harms that took place in Derry on January 30th because it had no choice. The level of international scrutiny and the internal political costs in a conflict-negotiation context were too high to sustain on this one egregious set of violations.
But, scrutiny has been circumscribed.
There has been no wide-ranging engagement with the events of the past in Northern Ireland. No truth recovery process has been agreed by the United Kingdom government, and the state remains hostile to its value. Other significant events, with substantial loss of life, remain uninvestigated (including the deaths in Ballymurphy, Belfast in 1971). The state has given accountability on Bloody Sunday (though notably the lack of prosecutions for some family members remains deeply problematic), yet is not prepared to address broader patterns of violence, life-taking, and conflict management.
This failure to address sustained and systematic state violations over decades is short-sighted.

Insightful research by Dr. Cath Collins (left), in her book Post-transitional Justice (2010), reveals that systematic human rights violations stay with a state – often resurfacing decades later and to more concentrated effect. (photo credit)
Bloody Sunday teaches us that the ‘past is never far away’, and that collective memory and trauma will stay at or just below the surface of communal and political life for decades.
As articulated in Principle 2 of the Set of Principles for the Protection and Promotion of Human Rights through Action to Combat Impunity (2005), prepared by IntLawGrrls contributor Diane Orentlicher while serving as a U.N. independent expert:

Bloody Sunday is testament to the spirit and practice of a right to truth, and to the personal and communal costs that follow from vindicating it.
by Fionnuala Ní Aoláin at 2:04 AM