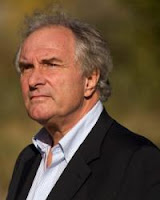 Events at the Extraordinary Chambers in the Courts of Cambodia (ECCC) have deteriorated considerably in the last few weeks.
We've blogged before about the enduring controversy over Cases 003 and 004 (see here) and the allegations of political interference by Hun Sen's government in the work of the Co-Investigating Judges, who are meant to be preparing those cases. Upon the resignation of Judge Judge Siegfried Blunk (Germany) in October 2010, the United Nations appointed Reserve Judge Laurent Kasper-Ansermet of Switzerland (right) as the new international Co-Investigating Judge on Dec. 1, 2010.

The Open Society Institute, whose Clair Duffy (left) has been monitoring the ECCC, issued a strongly critical report of these events (here) in October 2011. A key recommendation was that the Office of the Co-Investigative Judges be accorded the necessary financial and human resources, and political freedom, to exercise its legal duties, especially with respect to Cases 003 and 004. Events in recent weeks indicate that these recommendations have gone unheeded.
Manifesting the hybrid nature of the ECCC (and the negotiating acumen of the Cambodian government as the tribunal was being formed), the Agreement between the United Nations and the Government of Cambodia requires that international personnel be approved by the Cambodian Council of Ministers. Although Kasper-Ansermet has been in Cambodia for weeks, the final approval has not been forthcoming. When Kasper-Ansermet attempted to carry out even the most basic of functions, he was accused by his Cambodian counterpart, You Bunleng (left), of acting ultra vires. Bunleng pledged not to cooperate with, or even recognize, any actions taken by Kasper-Ansermet until the latter's appointment was official approved. Indeed, for several weeks, it seemed that the only communication between the two colleagues was through dueling and increasingly rancorous press releases. (See, e.g., here and here).
Last week, the Government issued a statement denying that the Office of the Council of Ministers was "obstructing or delaying" confirmation of the appointment. It claimed:

The matter is now in the hands of the Supreme Council of the Magistracy (SCM), which is now independently carrying [out] its normal procedures and legal considerations before a decision [can] be made.

The blogosphere, however, is alive with indications that the Council of Ministers has actually rejected Kasper-Ansermet's appointment. (See also here). If true, this would be an unprecedented affront to the Agreement establishing the tribunal and to the United Nations itself.

It remains to be seen how strong a stance the United Nations will take against the Cambodian Government with respect to this debacle. Upon Blunk's resignation, Patricia O'Brien, the United Nations' Under-Secretary-General for Legal Affairs (right), travelled to Phnom Penh to meet with members of the government, notably Sok An, the Deputy Prime Minister. She urged her interlocutors to respect the independence of the Tribunal and its personnel and to cooperate with ongoing proceedings. Apparently, Ban Ki-Moon and Prime Minister Hun Sen met informally on these issues in Bali in connection with an ASEAN meeting.
In other developments, the trial in Case 002 of regime leaders continues. Opening arguments were held in November (the best coverage can be found at the Cambodia Tribunal Monitor). The case has gone forward with only three defendants upon the determination that Ieng Thirith was unfit to stand trial, as we predicted. The Co-Prosecutors' appeal of the decision allowing the unconditional release of Thirith was successful, in that the Appeals Chamber ordered that the accused remain in detention and under medical care to determine if her condition could be improved to enable her to participate in the proceedings against her. For now, her case has been severed from that of her husband and co-accused.
by Beth Van Schaack at 1:14 AM