Go On! ICL, in China

"Sovereignty and Individual Criminal Responsibility for Core International Crimes" will be the subject of the 2012 Li Haopei Lecture and Seminar, to be held April 2 and 3, at the China University of Political Science and Law in Beijing, China. According to its sponsor, the Forum for International Criminal and Humanitarian Law, the event will examine the theme as it plays out in 3 issue areas:
► "First, when evidence of core international crimes incriminates State officials and there are calls for criminal investigation, State immunity concerns will continue to be voiced."
► "Secondly, the closing down of the ad hoc international criminal jurisdictions is likely to shift more attention to the exercise of national criminal jurisdiction over core international crimes, which would include jurisdictional exercise by States not directly affected by the said crimes."
► "Thirdly, the amendments of the ICC Statute at the 2010 Review Conference with regard to the crime of aggression may at one stage enable the ICC to investigate and prosecute such crimes."
Delivering the 2d annual lecture in honor of Judge Li (1906-97), a Chinese jurist, diplomat and academic who served on the International Criminal Tribunal for 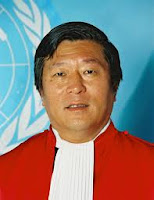 Women taking part in the seminar include Professor Ling Yan (right), Judge Li's daughter and Director of the Research Center for International Criminal Law and Humanitarian Law at China University of Political Science and Law, and Dr. Zhou Lulu, Director of the Treaty Division of the Department of Treaty and Law, Ministry of Foreign Affairs of China.
Details and registration (requested by March 21, 2012) for the Lecture and Seminar are available here.
by Diane Marie Amann at 3:00 AM