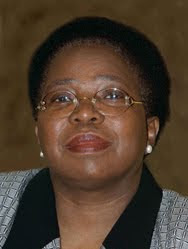 A South African politician's bid to become the 1st woman to lead the African Union Commission ended today -- but her male opponent wasn't re-elected, either.
Mounting the challenge was Dr. Nkosazana Dlamini Zuma (right), the South African Home Affairs Minister and the country's "first woman minister of Foreign Affairs," who was once married to the country's President, Jacob Zuma. (photo credit) A physician who earned her medical degree at Britain's University of Bristol, she served as Minister of Health during the tenure of President Nelson Mandela.
Dlamini Zuma had run for the top AU spot on a platform with planks that included "'ensur[ing] the emancipation of women," and "'consolidating democracy and good governance.'" She'd promised to "'buil[d] on the rich Pan-African tradition of consultation and consensus-building." 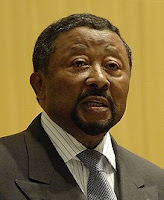 But in a closed-door meeting today, she failed to garner enough votes to defeat Jean Ping (left) of Gabon, who's held the chair since 2008. (photo credit)
Even after Dlamini Zuma withdrew according to AU rules, Ping failed to obtain the 2/3 vote required for re-election. Looks as if there'll be a new round of elections, in July in Malawi.
It's reported that the challenge to and non-re-election of Ping reflected "immense criticism from African leaders for the way in which he responded to the Libyan crisis."
For what, specifically?
Presumably, the report refers to Ping's condemnation of the International Criminal Court as "discriminatory" on the July 2011 day he presided over the African Union vote that refused to cooperate with the ICC arrest warrant of Muammar Gaddafi, then the leader of Libya.
That this performance provoked an African Union challenge – at a summit where Ban Ki-moon, the U.N. Secretary-General, earlier had "introduced" Fatou Bensouda of Gambia, incoming ICC Prosecutor – adds to other evidence (here and here) of what seems to be a thawing of long-chilly relations between African states and the ICC.
by Diane Marie Amann at 8:22 PM