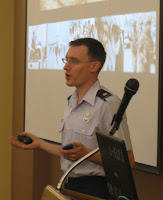 Santa Clara University School of Law recently held our 6th annual International Humanitarian Law (IHL) Workshop, co-hosted with the International Committee of the Red Cross. (See our prior coverage here). Faculty included lawyers with the ICRC, faculty of the JAG Center and School, human rights lawyers, government lawyers, and academics. Participants were mostly law and LLM students drawn from law schools all over the country, with a few foreign institutions represented as well.

Each year, we conclude the Workshop with a final role play/simulation. In the past, we've had students negotiate the text of a statute for an international tribunal to prosecute acts of terrorism or a domestic statute specifically authorizing law-of-war detention beyond whatever is implicit in the 2001 Authorization to Use Military Force (AUMF). (These exercises are posted here). We provide each group with "talking points," but they are expected to formulate the details of their negotiating positions and remain in character throughout the duration of the exercise. 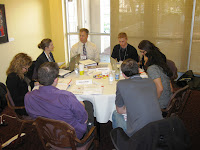 This year we convened mock Congressional hearings to discuss the drone killing of U.S. citizen Anwar al Aulaqi in Yemen in September 2011. Students were assigned to groups representing the Department of Defense, Human Rights First, the ACLU (which brought an unsuccessful suit in federal court on behalf of the decedent's father), the Special Rapporteur on Extrajudicial Killing, Republican & Democratic members of Congress (both hawks and doves), the Department of State, and the Central Intelligence Agency. Each group made an opening statement and then proceeded to give testimony in light of their particular concerns, mandates, and "red lines."

In this regard, participants were forced to grapple with complex questions involving the jus ad bellum and the jus in bello and their interaction. These included: 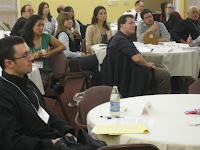 Even with only a week's training, the participants did an excellent job of spotting the issues and "representing" their clients. The simulation was followed by a panel discussion involving all faculty on the inter-agency process of formulating U.S. IHL policy.

Applications for next year's workshop will be open in the fall of 2013.
by Beth Van Schaack at 8:49 PM