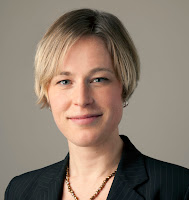 It's our great pleasure to welcome Johanna Westeson (left) as an IntLawGrrls contributor.
Johanna is the Regional Director for Europe in the International Legal Program at the Center for Reproductive Rights, a global legal advocacy organization dedicated to advancing women's reproductive health, self-determination, and dignity as basic human rights. As director of the Center's Europe team, she focuses on the promotion of reproductive rights in Eastern and Central Europe through work before regional and international human rights mechanisms, including work around abortion restrictions, the practice of coerced sterilization, and contraceptive coverage.
Before joining the Center, Johanna worked at the Swedish Foundation for Human Rights, where she was the Program Officer for Latin America and the Caribbean and also responsible for Human Rights Education. Johanna earlier had worked as a consultant to the World Health Organization ’s Sexual Health and Rights Project, as the main researcher on Europe. She produced a report that addressed a number of issues, with a core focus on reproductive rights, and analyzed laws and jurisprudence of European states, the European Union, and the European Court of Human Rights. She also worked with the Swedish Agency for International Development Cooperation in La Paz, Bolivia, where she ran its human rights and civil society program, and clerked at Uppsala District Court, Sweden.
Johanna earned a J.D. from Uppsala University in Sweden, and an LL.M from Columbia Law School in New York, where she was a Fulbright Scholar.
In her introductory IntLawGrrls post below, Johanna offers a critique of recent legislative efforts to regulate sex-selective abortions, and proposes a right-based approach to the issue.

Heartfelt welcome!
by Diane Marie Amann at 6:10 AM