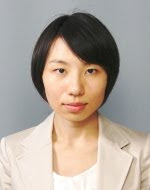 It's our great pleasure to welcome Dr. Machiko Kanetake (left) as an IntLawGrrls contributor.
An expert in United Nations law and international security law, Machiko joined the Amsterdam Center for International Law in November. There she's a postdoctoral researcher on the project entitled “New Checks and Balances at the Interface(s) between International and National Law.”
Machiko received her Ph.D. this past September from Kyoto University in Japan. She also holds an LL.M. from the London School of Economics, a bachelor's degree in international politics from Japan's Aoyama Gakuin University, and a master's degree in law from Britain's University of Sheffield.
In the 2010-2011 academic year, she was a Hauser Visiting Doctoral Researcher at New York University's Global Fellows Program. Her doctoral thesis analyzed the legitimacy of the exercise by the U.N. Security Council of authority over non-state actors; it built on the 2008 LL.M. thesis that Machiko published here.
In her introductory post below, Machiko examines difficulties with implementation the United Nations' zero tolerance policy against abuse by peacekeepers.

Heartfelt welcome!
by Diane Marie Amann at 6:10 AM