Jamaica’s Portia Simpson Miller: Out with the Old and in with the New 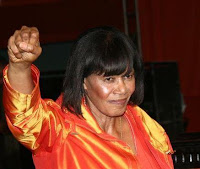 Portia Simpson Miller, who in 2006 became Jamaica’s first female Prime Minister, reclaimed the position in the country’s December 2011 general election. (photo credit) Simpson Miller adds her second term as Prime Minister to a number of prior posts within the People’s National Party, including the party’s Spokesperson on Women’s Affairs.
In the few weeks since her return to power, Simpson Miller has already turned heads, stating her intention to break away from the British monarch and declare Jamaica an independent republic.
Notably, it is not unlike Simpson Miller to go against the political grain.
In the months leading up to the election, she boldly pledged support for review of Jamaica’s homophobic sodomy law, and opened her cabinet to members of the lesbian, gay, bisexual, transgendered and intersex (LGBTI) community. (Video clip here.) The new Prime Minister’s seemingly pro- LGBTI stance stands in stark contrast to that of former Prime Minister Bruce Golding, who openly and categorically excluded gays from his Cabinet.
Simpson Miller’s increasingly progressive views toward LGBTI rights dovetail with her political posturing for greater national autonomy. Many Caribbean nations continue to criminalize consensual same-sex conduct under sodomy statutes, defending these laws on the bases of indigenous and cultural rights. In fact, however, these laws were inherited from the former British colonial power. It is therefore ironic that the Caribbean’s current sodomy laws should be defended on the grounds of cultural rights, when in fact they are a remnant of cultural imperialism.
Thanks to the tireless work of LGBTI advocates on the ground, Simpson Miller may soon find support in a regional forum. In 2011, advocates petitioned the Inter-American Commission on Human Rights to declare Jamaica’s sodomy statute to be in violation of international human rights law. The petitioners have pulled together an experienced legal team, including Lord Anthony Gifford, counsel to the landmark case of Dudgeon v. United Kingdom (1981), in which the European Court of Human Rights struck down Northern Ireland’s sodomy law.
The Inter-American Commission petition, together with Portia Simpson Miller’s pro-LGBTI rhetoric, may signal a changing tide in Jamaica and the wider Caribbean. Moving forward, LGBTI advocates can only hope that Simpson Miller will stay true to her word and finally shed the colonial vestiges of the current sodomy law.
by Toni Holness at 6:00 AM