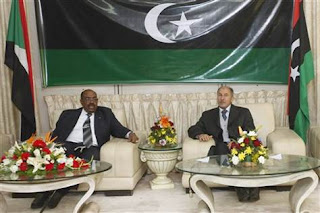 Anyone else see a disconnect between the mandate of U.N. Security Council Resolution 1970 and yesterday's sojourn of Sudanese President Omar al-Bashir in Libya?
As reported by the BBC, Libya's government extended a "welcome" to Bashir (far left). That government's leader, Mustafa Abdul Jalil (near left), went so far as to appear at a joint press conference with Bashir. (credit for AP photo by Abdel Magid Al-Fergany)
That government would be the Transitional National Council, now in power after the ouster of Muammar Gaddafi, the longtime Libyan leader who, at the time of his grisly death last year, was the subject of an international arrest warrant.
So too is Bashir.
As readers well know, the International Criminal Court has sought custody of Bashir since 2009, on charges of genocide and other international crimes in Darfur, Sudan. But pleas for cooperation in arresting the incumbent-cum-fugitive have fallen on deaf ears. Among the deaf: the Security Council, which requested the ICC to investigation in both instances; at least one of its permanent members, China; ICC member states including Kenya (but see newest developments here), Chad, Djibouti, and Malawi.
And now joining the deaf, the very Libyan opposition that profited from international condemnation of the country's former leader.
Query whether Libya's welcome jibes with these paragraphs of the February 26, 2011, Security Council resolution that set in motion the ICC investigation:

Stressing the need to hold to account those responsible for attacks, including by forces under their control, on civilians, ...
Mindful of its primary responsibility for the maintenance of international peace and security under the Charter of the United Nations,
Acting under Chapter VII of the Charter of the United Nations, and taking measures under its Article 41,
...
2. Urges the Libyan authorities to:
(a) Act with the utmost restraint, [and] respect human rights and international humanitarian law, ...

ICC referral
4. Decides to refer the situation in the Libyan Arab Jamahiriya since 15 February 2011 to the Prosecutor of the International Criminal Court;
5. Decides that the Libyan authorities shall cooperate fully with and provide any necessary assistance to the Court and the Prosecutor pursuant to this resolution ....

The name given to Resolution 1970?
"Peace and security in Africa" – a worthy continental goal, sadly undermined by yesterday's welcome.
by Diane Marie Amann at 3:31 PM