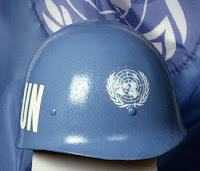 he readers of IntLawGrrls may be well aware of the sex scandal involving UN peacekeepers. The gulf between the public’s ideal concept of blue helmets and the reported incidents ignited media attention since the late 1990s.
In order to reclaim its reputational asset, the UN has committed itself to the Zero Tolerance policy embodied in the Secretary-General’s Bulletin, issued by Kofi Annan on October 9, 2003, and available in multiple languages here. (photo credit)
Detailed analyses of this Zero Tolerance policy have been widely published, including a feminist critique by Melbourne Law Professor Dianne Otto: 'Making Sense of Zero Tolerance Policies in Peacekeeping Sexual Economies', in Vanessa E. Munro and Carl F. Stychin (eds.), Sexuality and the Law: Feminist Engagements (2007) 259 (available in draft here).
I would like to present two slightly different angles from which to reconsider the Zero Tolerance policy:
► First, whose zero tolerance matters to this policy?
I have addressed this question in my short piece: “Whose Zero Tolerance Counts? Reassessing a Zero Tolerance Policy against Sexual Exploitation and Abuse by UN Peacekeepers”, International Peacekeeping, vol. 17, 2010, pp. 200-214..
► Second, the Zero Tolerance policy can be understood as the UN’s attempt to resolve discordance between political and legal lines which separate the UN (internality) from non-UN elements (externality).
The political boundary internalizes broader conduct and tasks within the UN. Sexual exploitation and abuse are often presented by the media as part of the “UN’s own problems”, and not those of a peacekeeper himself/herself or of contingent-contributing countries.
At the same time, the UN itself cannot simply externalize the problems, since it is politically difficult for the Organization to categorically claim that sexual misconduct is someone else’s matter. It would have to proceed based upon such a political reality, which ascribes peacekeepers’ misconduct to the UN and places the political burden on it to resolve them.
The legal boundary externalizes much of the conduct and tasks which are internalized by the political line. Sexual exploitation and abuse are not, in principle, attributable to the UN as an organization. The UN has long maintained that it has no legal or financial liability for off-duty acts of members of peacekeeping forces.
The major tasks necessary for the effective implementation of the Zero Tolerance policy are also external to the UN. Five steps concern the implementation of the policy:
► Application of the Codes of Conduct;
► Receipt of allegations;
► Investigations;
► Disciplinary actions; and
► Criminal prosecution.
The UN has authority at least over the first two steps.
The UN has achieved the universal application of the Codes of Conduct. This achievement follows the recommendations in A comprehensive strategy to eliminate future sexual exploitation and abuse in United Nations peacekeeping operations, the report by an Annan-appointed adviser, Jordanian Prince Zeid Ra’ad Zeid Al-Hussein, delivered to the General Assembly on March 24, 2005, and available in multiple languages here.
In addition, the UN receives allegations through its Conduct and Discipline Unit, its mission-based Conduct and Discipline Teams, and its Office of Internal Oversight Services.
With respect to the latter three steps, however, the legal authority necessary for the implementation of the policy is virtually externalized, particularly for the members of formed police units and members of national military contingents.
The investigation procedure in Article 7 of the revised model Memorandum of Understanding, available here, placed the primary investigatory responsibility on the sending government of contingent members. Disciplinary and criminal jurisdiction over military members of national military contingents thus exclusively belongs to contributing states, even when the acts are performed in members’ private capacity.
Such “discordance” between politics and law could be resolved if either the political or legal line can be redrawn.
However, as noted above, it is politically difficult for the UN to treat sexual exploitation and abuse as something external to it. To redraw the legal line is simply not feasible, as the UN cannot practically exercise disciplinary, much less criminal, jurisdiction over contingent members.
The only recourse available for the UN is, therefore, to substantially remedy the discordance without changing the incumbent lines. It can do so by aligning the vector of the externalities with that of the UN -- in particular, by aligning the policies of countries that contribute peacekeeping contingents with the policies of the UN. Such policy alignment may be precisely what the Zero Tolerance aims for.
Returning to the first question I posed above: It is the non-tolerance of contingent-contributing countries that counts the most for the purpose of remedying this discordance in politics and law.
by Machiko Kanetake at 5:10 AM