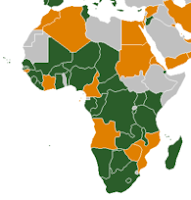 'The appointment of African officials to senior offices at the ICC reflects the important role that individual Africans are playing in contributing to the success of the court and is of great significance to promoting mutual understanding and strengthening cooperation between the ICC and the AU. Our organizations hope that African states and the AU will lend their support to the newly elected ICC prosecutor, while fully respecting her independence.'

So stated the "Letter to Foreign Ministers of African States Parties to the ICC" signed by nearly 3 dozen nongovernmental organizations based in 19 different African countries. Released Thursday, the letter seeks to prod leaders of African countries that have joined the International Criminal Court to discuss improvement of ICC-Africa relations during the 19th Ordinary Session of the Assembly of the African Union, which will take place Sunday and Monday in Addis Ababa, the Ethiopian capital that's home to the African Union's Secretariat. (Prior IntLawGrrls posts on Africa and the ICC available here.) (credit for map showing ICC states parties in green, signatories in yellow, and states that have neither joined nor signed the ICC treaty in grey)
The incoming senior officials to which the passage refers are Fatou Bensouda of Gambia, elected the ICC Prosecutor effective mid-2012, and Chile Eboe Osuji of Nigeria, who has been serving as Legal Advisor to the Office of the U.N. High Commissioner of Human Rights and was elected an ICC judge in December.
Improvements recommended include:
► More meetings and "exchange of views" between officials of the African Union and the ICC;
► Establishment by the African Union of an ICC liaison office in Addis Ababa; and
► Fulfillment by states parties of their obligations under the ICC treaty to implement warrants and decisions of the court.
The letter urged further development of national justice systems so that they might pursue persons accused of the core crimes that ICC now prosecutes – genocide, crimes against humanity, and war crimes – domestically, as envisaged by the ICC Statute's complementarity principle.
At the same time, the letter expressed concern about proposals to shift the ICC's Africa docket to a regional tribunal by simple expansion of the competence of the African Court of Justice and Human Rights, an entity in the process of being established, pursuant to a 2008 agreement, by merger of 2 pre-existing regional courts. The NGOs wrote:

'Notably, the African Court already faces serious challenges implementing its current mandate and giving it jurisdiction over a distinct type of offenses (crimes under international law committed by individuals, as opposed to human rights violations by states) would require significant time to establish new expertise and a vast overhaul in the way the court is currently set-up.'

Great to see this letter being discussed. It's significant not only because, as you noted, it was a joint effort of NGOs based across the continent (disclosure: my organization signed), but also because the recommendations to the African states parties to the ICC were wholly constructive and veered away from criticizing the AU decision of last year urging states not to cooperate on arrests etc. This approach from civil society shows an understanding that it is going to take time and sincere efforts at persuasion to show many states that perceptions of the ICC as a hegemonic tool of the north are incorrect. There are many African states parties to the Rome Statute that support the ICC strongly - for example, Botswana which used its keynote address at the last Assembly of States Parties in December 2011 to urge states to recognise non-cooperation for what it is: "a serious setback" to dealing with impunity in Africa. These states need to find their voice within the African Union to bring the discussion back to what remains the essential point: Africa as a whole is a great supporter of the ICC - and civil society too must continue to find ways to demonstrate and reinforce this point.

Thank you for your valuable comment, Stephanie.
The Botswana speech you mention is described at http://www.taiwannews.com.tw/etn/news_content.php?id=1785522, and analyzed by South African jurist Max du Plessis at http://allafrica.com/stories/201112140789.html.
In similar vein was the "Pro-ICC pushback" at a conference in Botswana last July, about which we posted at http://www.intlawgrrls.com/2011/07/pro-icc-pushback.html.