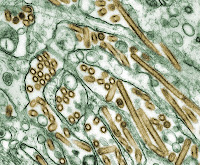 Concerns about the H5N1 research have again forced scientists and policy makers to think about risks associated with well-intentioned, lawful, and potentially valuable research that might facilitate bioterrorism or result in accidental release or escape. The World Health Organization (“WHO”) captured the conundrum when it expressed concern about potentially adverse consequences of the H5N1 research but stressed that research continue “so that critical scientific knowledge needed to reduce the risks posed by the H5N1 virus continues to increase.” Balancing costs and benefits requires governance of risky research, and the international scale of such research brings international law into the picture.

-- Our colleague David P. Fidler, the James Calamaras professor of Law at Indiana University Maurer School of Law in Bloomington, in "Risky Research and Human Health: The Influenza H5N1 Research Controversy and International Law." a recent ASIL Insight. David set the stage by discussing a recent WHO decision to hold off on publishing research on a dangerous strain of bird flu. (credit for electron micrograph of the flu strain at issue, H5N1) A news story on Saturday, in fact, reported that researchers have postponed work altogether. David's essay then proceeded to demonstrate the current absence of international legal mechanisms in the area and to propose models for governance that officials might consider in planned, WHO-administered negotiations.
by Diane Marie Amann at 3:04 AM