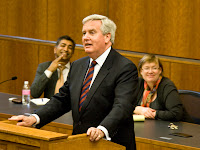 What, then, is the significance of the Court in international life? It would be easy to conclude that a court which has no genuinely compulsory jurisdiction and which cannot turn to any of the normal apparatus of the State (on which national courts can rely) to enforce the judgments which it gives cannot play a significant role. Such a conclusion would be facile and misleading.

-- Sir Christopher Greenwood (above right), CMG, QC, Judge on the International Court of Justice since 2009, and former Professor of International Law at the London School of Economics. The passage appears in "The Role of the International Court of Justice in the Global Community," 17 U.C. Davis J. Int'l L. & Pol'y 233, 248 (2011), the recently published version of the lecture by Greenwood (above right, with Anupam Chander and IntLawGrrls contributor Andrea K. Bjorklund in background) that I was honored to help host, on March 1, 2011, at the University of California, Davis, School of Law.
by Diane Marie Amann at 5:20 AM