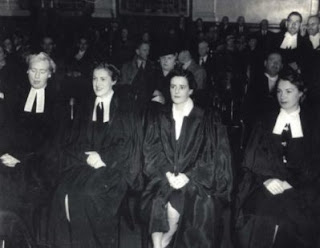 On this day in ...
... 1942 (70 years ago today), Quebec's 1st women lawyers were admitted to the bar. By year's end there were 4. Pictured, from left, they were:
Elizabeth Carmichael Monk, Constance Garner-Short, Suzanne Raymond-Filion, and Marcelle Hémond-Lacoste. (photo credit) Monk had waited nearly 2 decades for admission -- in 1923 she'd earned her law degree, "with the highest standing in the civil law program" at McGill University. She went on to a distinguished career, both as a corporate attorney and as a drafter of

'legal arguments that would be used by women fighting other monumental struggles of the time like the right to vote (obtained in Quebec in 1940), the right to equal salary for equal work, and the right for admittance to professional orders.'

For Garner-Short, the wait had been 8 years; in the interim, she'd worked at the Portuguese consulate and been a Red Cross Transport driver during World War II. Hémond-Lacoste would become President of a hospital, the Sainte-Justine in Montréal.