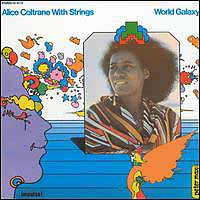 On this day in ...
... 2007 (5 years ago today), Alice Coltrane died in Los Angeles. She'd been born Alice McLeod 69 years earlier in Detroit, where she began a music career after having studied in Paris. In the early 1960s she met and married her 2d husband, jazz musician John Coltrane, and joined his band; they played and recorded together till his death in 1967. She continued to play, became a follower of an Indian guru, changed her name to Turiyasangitananda, and opened an ashram near Malibu. (credit for cover of her 1972 album World Galaxy)