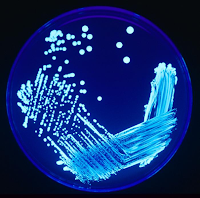 On this day in ...
... 1977 (35 years ago today), a special issue of the Morbidity and Mortality Weekly Report of the Atlanta-based Centers for Disease Control, announced that researchers had isolated a previously unknown bacterium responsible for an outbreak of "severe respiratory illness" that struck 180 persons, 29 of whom died, during a Pennsylvania American Legion convention. Colloquially the illness is known as Legionnaire's disease; the genum of the bacterium (right) was named Legionella. (photo credit)