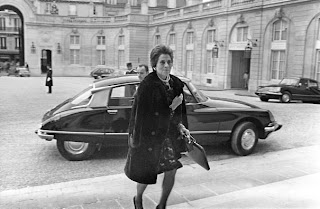 On this day in ...
... 2003, Françoise Giroud (left) died in Neuilly-sur-Seine, France. She'd been born Lea France Gourdji 86 years earlier in Lausanne, Switzerland, to immigrant Sephardic Turkish Jewish parents. Her 1st job was as a "script-girl" on the 1932 Marcel Pagnol film Fanny. She went on to write screenplays and books, to work as a journalist, to co-found the news magazine L'Express. (credit for undated AFP photo) During World War II she was briefly detained by the Gestapo; a sister died at the Nazis' Ravensbrück camp. A member of the Radical Party, in the 1970s she served in a Gaullist Cabinet as State Secretary of the Feminine Condition. Criticized for joining a conservative government, she replied,

'Feminism, as I know it, is neither right nor left.'

Thereafter, she was Minister of Culture. As recalled by French Senator Lucie Pépin, upon Giroud's death L'Express wrote:

'Women everywhere have lost something. Madame Giroud defended them so intelligently and so strongly.'