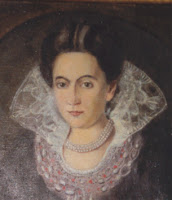 ... 1572 (440 years ago today, though a number of other sources say it was January 28), Jeanne-Françoise Frémyot was born into an aristocratic family in Dijon, France. She lost her mother at 18 months of age. Her father gave her an education, then gave her in marriage, at age 20, to the Baron de Chantal. By age 28 she was the widowed mother of 3 children; another 3 had died shortly after childbirth. (credit for portrait of her at age 30) After meeting St. Francis de Sales, she founded, in 1610, a religious "order for women who were rejected by other orders because of poor health or age" -- the Order of the Visitation of Holy Mary. Known in English as Jane Frances de Chantal -- the name this 'Grrl took at confirmation -- she died at the age of 69 at a convent in Moulins that she had established, and was named a Roman Catholic saint in 1767. Herself the author of spiritual letters, de Chantal also was the grandmother of a noted epistolary author, Marie de Rabutin-Chantal, best known as the Marquise de Sévigné.