On this day in ...
... 1920, according to an item entitled "POSTPONEMENT OF THE ANNUAL MEETING OF THE AMERICAN SOCIETY OF INTERNATIONAL LAW" and published at 14 American Journal of International Law 382 (1920): 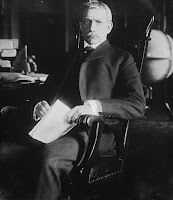 At the meeting of the Executive Council of the American Society of International Law held in Washington on the 24th day of January, 1920, after very full discussion, the Council unanimously resolved that in view of the existing diplomatic situation, it was expedient to postpone the general meeting of the Society for the year 1920, until a time when general discussion of international questions that are of active public interest may be useful rather than embarrassing.
Timely notice of the postponed meeting will be given.
Elihu Root,
President.

Reason for this extraordinary measure? Presumably, an event that had occurred just days earlier: the failure to reach a compromise by which the Senate would have given its advice and consent to the Versailles Treaty and, thus, to the League of Nations Covenant. (credit for undated photo of Root)
(Prior January 24 posts are here, here, here, and here.)
by Diane Marie Amann at 12:04 AM