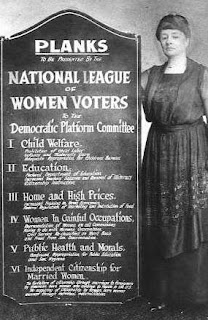 On this day in ...
... 1871, Maud Wood Park (right) was born in Boston, Massachusetts. An 1898 summa graduate of Radcliffe, "where she was one of only two students in a class of seventy-two to favor the vote for women," Park would go on to a career in social work and political activism. Initially, she worked in her own area, serving as a leader in city and state suffrage organizations; then, recruited by Carrie Chapman Catt, she became a campaigner for women's suffrage throughout the United States -- a goal achieved with the passage of the 19th Amendment to the U.S. Constitution in 1920. That same year, Park became the 1st President of the League of Women Voters, serving till 1924, and in that time successfully lobbying for legislation that benefited women and children. (credit for photo from Library of Congress collection of her papers) She would remain a popular lecturer till her death in 1955.