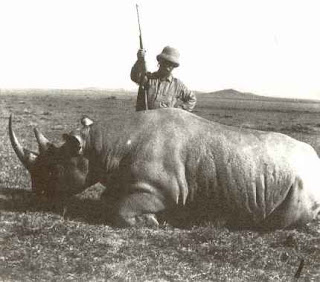 On this day in ...
... 1900, in a letter to a friend, Theodore Roosevelt, then Governor of New York, wrote of the style with which he dealt with political intrigue in Albany:

I have always been fond of the West African proverb: 'Speak softly and carry a big stick, you will go far.'

Indeed, he would go far. By year's end the author would be elected President of the United States, one whose record recently was invoked by the current holder of that office. As the Library of Congress notes, the quoted phrase would "become a trademark description" of foreign policy in the administration of Roosevelt– who was also, and not coincidentally, a big-game hunter. (credit for photo of Roosevelt during 1910 African safari)

It's a good thing Safaris these days involve shooting with cameras instead of guns. That way, we don't hurt the environment and more people get to see the wonders of Africa.