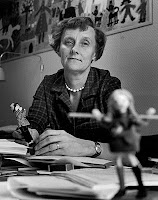 On this day in ...
... 2002 (10 years ago today), Astrid Lindgren (right) died in Stockholm, Sweden. She'd been born 94 years earlier in the Swedish village of Vimmerby. Earlier in her career as a journalist, she became pregnant by her editor, whom she refused to marry, moved to Stockholm, and placed her son with a foster family. Eventually she would marry a different man and give birth to 2 more children. To amuse her often-ill

daughter, Lindgren invented stories about a headstrong, pigtailed girl named Pippi Longstocking (in Swedish, Pippi Långstrump). On account of this series and other writings, Lindgren "is the world's 18th most translated author." A children's book award is given annually in her name. Meanwhile, Pippi has resurfaced in popular culture, as an inspiration for the Girl with the Dragon Tattoo trilogy by the late Swedish novelist Stieg Larsson.