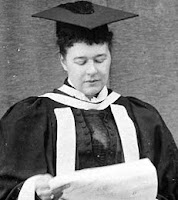 On this day in ...
... 1897 (115 years ago today), in Ottawa, Ontario, "[d]espite fierce opposition from the medical establishment," Ishbel Maria Gordon (right), titled Lady Aberdeen and married to the Governor General of Canada, helped to form the Victorian Order of Nurses as a means to provide care in outlying regions; it continues to promote health care to this day. Its name was chosen to recognize the Diamond Jubilee, or 60th anniversary of the reign of Britain's Queen Victoria. (credit for 1897 photo at right of Lady Aberdeen becoming the 1st woman to receive an honorary degree in Canada; credit for photo below of nurses sent to Yukon in 1898, from left, Margaret Payson, Rachel Hanna, Georgina Powell, and Amy Scott) As we've posted, other founders included Henrietta Muir Edwards and Adelaide Hunter Hoodless. Establishment of the nurses' order, which now goes by its acronym, VON, came at the request of the Canadian branch National 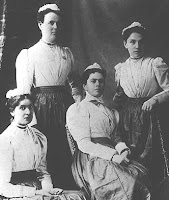 Council of Women, another of several women's organizations in which Lady Aberdeen was active even though her activism drew ridicule. As stated here,

She believed that women represented an enormous, unused capacity in Canada, and that they would be a civilizing force in an untamed country.