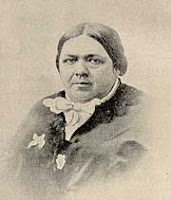 ... 1827 (175 years ago today), a daughter, Letitia, was born to an Irish-born father and an American-born mother in a log cabin on a small farm in Hamilton Township, Upper Canada. Her parents brought her up in the Methodist Church and sent her to school when she was 4; following her graduation from the Burlington Academy in Hamilton, she became a teacher at the same school. In 1850 she married a widower with 8 children; thereafter, Letitia Creighton Youmans (right) became active in the anti-alcohol movement, founding a local branch of the Woman’s Christian Temperance Union, which campaigned successfully for local prohibition of liquor. She also campaigned on behalf of young women, railway workers, prison inmates, and members of the armed forces. (photo credit) As described here,

Youmans excelled on the platform, where her long, turgid, but emotionally inspired speeches based on biblical themes were enthusiastically received.

A few years before she died in 1896, from bouts with inflammatory rheumatism, Youmans was named the honorary 1st president of Canada's Dominion Women's Christian Temperance Union. She published an autobiography, Campaign Echoes, in 1893.