On this day in ...
... 1938, then-Crown Princess Juliana gave birth to a daughter (left) at Soestdijk Palace in the Dutch community of Baarn. (photo credit) The baby was named Beatrix Wilhelmina Armgard and given the titles Princess of the Netherlands, Princess of Orange-Nassau and Princess of Lippe-Biesterfeld. The mother would bear 2 more daughters, one daughter while in exile during World War II, and would become Queen Juliana upon retirement of her own mother, Queen Wilhelmina, in 1948. Decades later, Juliana likewise would abdicate in favor of her eldest, known since 1980 as Queen Beatrix I. This 'Grrl had the honor of 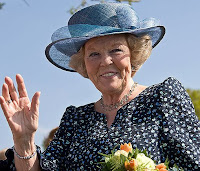 glimpsing the reigning queen, dressed much as she is in the 2008 photo at right, during my visit to The Hague in March. (credit) The monarch earned a special tip of the tiara a couple weeks ago, when, during a visit to the United Arab Emirates, as described by the Associated Press,

'Queen Beatrix took on the fiery leader of her country's anti-Muslim party on Thursday by dismissing as "nonsense" his criticism of her decision to wear a head scarf during a recent visit to a mosque.'