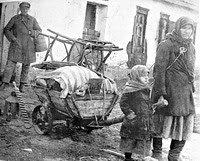 On this day in ...
... 1930, the Central Committee of the Stalin-led Soviet Union decreed that both land and people would be "collectivized" within the year. The decree effectively "recogniz[ed] and endors[ed] what already had become a reality"; that is, expropriation from and/or forced-exiling of many thousands of kulaks, or peasants, who'd farmed in many grain-producing areas, especially in the Soviet Socialist Republic now the independent state of Ukraine. (photo credit)

Although I'm joining this conversation late, I must point out to your readers that the peasants suffered more than expropriation and exile. Soviet/Communist policies led to the deaths of millions by starvation, an intentional genocide of the Ukrainian nation (in Ukraine, in the Kuban region of Russia where Ukrainians lived, and in the Ukrainian parts of Kazakhstan). No need to pull punches here. The Soviet state apparatus deliberately starved millions of peasants to death. It was an intentional genocide of the Ukrainian people, even if countries like Russia don't admit it.

But don't take just my work for it: