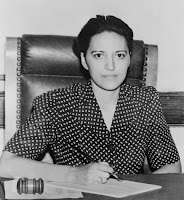 On this day in ...
... 2007 (5 years ago today), Jane Bolin (left) died, 98 years after her birth in Poughkeepsie, New York; her parents, as described in her New York Times obituary, were a father who was "the son of an American Indian woman and an African-American man" and a mother who "was a white Englishwoman." Bolin was the 1st African-American woman judge, appointed to New York's Family Court in 1939; in 1931, she'd become the 1st African-American woman to receive a Yale Law degree. An outspoken civil rights and women's rights advocate, Bolin served on the bench until mandatory retirement at age 70. "She chose not to wear judicial robes in order to make children feel more comfortable." (credit for 1942 photo)