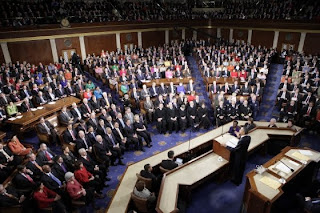 Last night, President Barack Obama delivered his annual State of the Union Address. (photo credit)
Like last year, he focused on the potential for unity over energy independence, transition to cleaner energy, and energy infrastructure rather than on addressing climate change. He continued to tie that transition to innovation, construction, and jobs.
However, the tone was somewhat different. Unlike last year, where he did not mention climate change directly, he openly acknowledged partisan divisions with respect to climate change and even energy while trying to find bipartisan ground. The President also spent time discussing the expansion of offshore drilling and natural gas as positive rather than just emphasizing the need to shift towards cleaner sources.
I liked the realism of this shift. One of the reasons I spent time in the aftermath of the BP Deepwater Horizon oil spill exploring the complexity of offshore drilling and oil spill regulation, and principles for moving forward and addressing environmental justice concerns, is because I believe that the desire for energy independence and security will compel us to keep drilling deep in at least the short-to-medium term. Similarly, I think that natural gas is an important transitional energy source because we are not ready to shift dramatically to cleaner sources in the near term.
I do think it's important, though, to think beyond our present constraints. I live in the Midwest, with its massive wind capacity, and was particularly heartened by two experiences I had during my Climate Change and Clean Energy capstone course last semester. First, when John Dunlop of the American Wind Energy Association visited us, he emphasized that between on-shore and off-shore wind, we have capacity to more than meet our energy needs and that intermittency is more manageable than it is often portrayed as being. Second, when we went on a tour of the MISO, the Midwestern regional transmission organization, the operator answering our questions emphasized that they try to get as much wind online as possible. This effort is not motivated by any type of environmental mandate, but out of their mission of reducing cost and maximizing reliability – the wind is cheaper than the more polluting sources. I hope that we can move beyond bipartisanship to use law as a tool for the energy transformation – through a combination of conservation, efficiency, and transitioning sources – that would be a win-win for this country.
I include the most relevant portion of the State of the Union below:

After all, innovation is what America has always been about. Most new jobs are created in start-ups and small businesses. So let’s pass an agenda that helps them succeed. Tear down regulations that prevent aspiring entrepreneurs from getting the financing to grow. (Applause.) Expand tax relief to small businesses that are raising wages and creating good jobs. Both parties agree on these ideas. So put them in a bill, and get it on my desk this year. (Applause.)
Innovation also demands basic research. Today, the discoveries taking place in our federally financed labs and universities could lead to new treatments that kill cancer cells but leave healthy ones untouched. New lightweight vests for cops and soldiers that can stop any bullet. Don’t gut these investments in our budget. Don’t let other countries win the race for the future. Support the same kind of research and innovation that led to the computer chip and the Internet; to new American jobs and new American industries.
And nowhere is the promise of innovation greater than in American-made energy. Over the last three years, we’ve opened millions of new acres for oil and gas exploration, and tonight, I’m directing my administration to open more than 75 percent of our potential offshore oil and gas resources. (Applause.) Right now -- right now -- American oil production is the highest that it’s been in eight years. That’s right -- eight years. Not only that -- last year, we relied less on foreign oil than in any of the past 16 years. (Applause.)
But with only 2 percent of the world’s oil reserves, oil isn’t enough. This country needs an all-out, all-of-the-above strategy that develops every available source of American energy. (Applause.) A strategy that’s cleaner, cheaper, and full of new jobs.
We have a supply of natural gas that can last America nearly 100 years. (Applause.) And my administration will take every possible action to safely develop this energy. Experts believe this will support more than 600,000 jobs by the end of the decade. And I’m requiring all companies that drill for gas on public lands to disclose the chemicals they use. (Applause.) Because America will develop this resource without putting the health and safety of our citizens at risk.
The development of natural gas will create jobs and power trucks and factories that are cleaner and cheaper, proving that we don’t have to choose between our environment and our economy. (Applause.) And by the way, it was public research dollars, over the course of 30 years, that helped develop the technologies to extract all this natural gas out of shale rock –- reminding us that government support is critical in helping businesses get new energy ideas off the ground. (Applause.)
Now, what’s true for natural gas is just as true for clean energy. In three years, our partnership with the private sector has already positioned America to be the world’s leading manufacturer of high-tech batteries. Because of federal investments, renewable energy use has nearly doubled, and thousands of Americans have jobs because of it.
When Bryan Ritterby was laid off from his job making furniture, he said he worried that at 55, no one would give him a second chance. But he found work at Energetx, a wind turbine manufacturer in Michigan. Before the recession, the factory only made luxury yachts. Today, it’s hiring workers like Bryan, who said, “I’m proud to be working in the industry of the future.”
Our experience with shale gas, our experience with natural gas, shows us that the payoffs on these public investments don’t always come right away. Some technologies don’t pan out; some companies fail. But I will not walk away from the promise of clean energy. I will not walk away from workers like Bryan. (Applause.) I will not cede the wind or solar or battery industry to China or Germany because we refuse to make the same commitment here.
We’ve subsidized oil companies for a century. That’s long enough. (Applause.) It’s time to end the taxpayer giveaways to an industry that rarely has been more profitable, and double-down on a clean energy industry that never has been more promising. Pass clean energy tax credits. Create these jobs. (Applause.)
We can also spur energy innovation with new incentives. The differences in this chamber may be too deep right now to pass a comprehensive plan to fight climate change. But there’s no reason why Congress shouldn’t at least set a clean energy standard that creates a market for innovation. So far, you haven’t acted. Well, tonight, I will. I’m directing my administration to allow the development of clean energy on enough public land to power 3 million homes. And I’m proud to announce that the Department of Defense, working with us, the world’s largest consumer of energy, will make one of the largest commitments to clean energy in history -– with the Navy purchasing enough capacity to power a quarter of a million homes a year. (Applause.)
Of course, the easiest way to save money is to waste less energy. So here’s a proposal: Help manufacturers eliminate energy waste in their factories and give businesses incentives to upgrade their buildings. Their energy bills will be $100 billion lower over the next decade, and America will have less pollution, more manufacturing, more jobs for construction workers who need them. Send me a bill that creates these jobs. (Applause.)
Building this new energy future should be just one part of a broader agenda to repair America’s infrastructure. So much of America needs to be rebuilt. We’ve got crumbling roads and bridges; a power grid that wastes too much energy; an incomplete high-speed broadband network that prevents a small business owner in rural America from selling her products all over the world.

(Cross-posted on Environmental Law Profs Blog and SaltLaw Blog.)
by Hari M. Osofsky at 10:48 AM