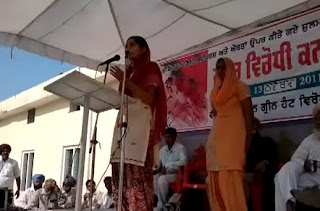 Amandeep Kaur explains, as a marker of her family’s honor, how she had never even glanced toward a police station, a place for men, all her life. At least not until summer 2011.
Her perspective changed when her village of Gobindpura, in southern Punjab (on the Indian side), was declared the chosen site for a new thermal power project that required the acquisition of the villagers’ ancestral farm lands.
Her decision to participate in citizens’ protest resulted in five arrests and detentions at the police station, several beatings, sexualized taunts and severe threats.
Captured in a November 2011 YouTube video (above right) that is gaining popularity amongst Punjabi diaspora, the story of Amandeep Kaur (no relation to me) is an apt one to remember in the context of the recent 16 Days of Activism Against Gender Violence. The 16 Days global campaign, which commenced on November 25, the International Day Against Violence Against Women and concludes on December 10, International Human Rights Day, reminded us that women’s assertion of their rights will naturally impact other human right concerns that weaken our communities.
Amandeep’s story demonstrates how women in Punjab are standing up and sacrificing for the inclusive development and rights for all. In Amandeep’s village, these rights—rights to work, to liberty and security of person, and indeed to life itself—were threatened by a power company and its powerful nexus with the state forces.
The power company acquiring lands in Gobindpura, Poena Power, is a reported subsidiary of the Indian conglomerate Indiabulls.
India is been rated as an ‘extreme risk’ country on the Women’s and Girls’ Right Index, published in November by the risk analysis company Maplecroft. Maplecroft warns global companies entering such emerging economies of the danger of possible complicity in “violations [against women] committed by state security forces or other actors.” While this might be especially relevant in light of India’s decision this past November to open even its retail business sector to multinational companies, the struggle in Gobindpura illustrates how women’s security is also at immediate risk, because of the growing gulf between the poor and the rich within the same country.
Braving these imminent risks, the villagers of Gobindpura protested through Summer 2011, almost at the same time as the growing Occupy Movement on the other side of the globe, but with even lesser media attention. Gobindpura’s women and girls made the conscious decision of protesting alongside the men. For the lands at-risk were as much markers of their ancestory, identity, and livelihood as of their male counterparts.

Beginning in June 2011, women sat and marched in protest, in the face of the reality that many of the village men had already been arrested, beaten, thrown in jail, and tortured. The women were treated no differently. Their clothes were torn, their hair pulled, and they were caught in clouds of red, as cannons sprayed water mixed with red chili pepper. (credit for photo of khaki-clad police and pink-scarved protester) As they were arrested and detained, police officers reportedly recommended that the only way out was to accept the checks from the company.
As the agitations in Gobindpura caught the attention of other farmer and labor unions, the village was cordoned off by police forces, who denied any ingress and egress, and fortified their constant presence by several means, including converting the sole village health dispensary into a police camp. But now, the Gobindpura issue was also ripe for selective attention from opposition political-parties-in-waiting, given that it is pre-election season in Punjab.
Gobindpura is not a lone example of land acquisition and the agrarian neglect in Punjab, the ‘bread basket’ of India that has paradoxically seen over 50,000 debt-induced farmer suicides in the last two decades. However, unlike other places that remain obscure, Gobindpura has now gained profile, and due to a confluence of political factors, some relief, whether in the form of alternate government jobs or negotiated higher settlement, seems more likely. (See here, here, and here.) Nonetheless, for all the action in and around Gobindpura, the power company has begun construction of the plant, mostly unfazed.
It was in an attempt to oppose this foisted and exclusionary development, that thought nothing of the poor and the vulnerable who were going to be uprooted by it, that the women of Gobindpura entered the larger male-dominated spheres with intensity and at much personal cost. A preoccupation with women’s bodies sadly determines for some of us which issues are labeled as “women’s issues”—rape, domestic violence, reproductive oppression. Yet, Amandeep and her friends remind us once again that women ask for no special treatment, but only, as the Sikhs of Punjab say, for sarbat da bhalla, the welfare of all. For this, inclusive development is an imperative and not an option.
by Mallika Kaur at 6:10 AM

Wow! Thanks for bringing stories like this to our attention! :)
To sisterhood growing worldwide!