David Scheffer, newly appointed special envoy to Extraordinary Chambers in the Courts of Cambodia (ECCC) by the United Nations (as we reported here) has hit the ground running. Further to our posts (here, here and here) about the impasse at the ECCC over the appointment of reserve Co-Investigating Judge, Laurent Kasper-Ansermet of Switzerland, Scheffer, who traveled to Phnom Penh this week on behalf of the United Nations, has announced that there is no impediment to the Swiss jurist assuming his position and carrying out his functions as Co-Investigating Judge. The Supreme Council of Magistracy had delayed "confirming" Kasper-Ansermet's appointment, apparently on the grounds that he was "unsuitable." The grounds: he had used his Twitter account to discuss the debate over the propriety of pursuing Cases 003 and 004. Scheffer in his remarks also encouraged Kasper-Ansermet to build "credible" case files with respect to the controversial Cases 003 and 004. 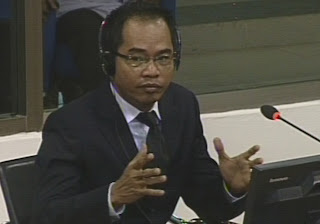 In other news, Case 002 involving the surviving regime leaders, continues. Coverage is available on the ECCC's website as well as the Cambodia Trial Monitor. The tribunal recentlyheard testimony from Peoudara Vanthan ("Dara"), deputy director of the Documentation Center of Cambodia (DC-Cam). The defendants have attacked the neutrality of DC-Cam, arguing that its vast documentary holdings should be viewed with suspicion. The questioning seemed to suggest that the Center was prejudiced against the accused and had organized its holdings to facilitate the defendants' prosecution. There were also questions challenging the provenance and subsequent chain of custody of many of the documents, which are decades old.
by Beth Van Schaack at 4:15 PM