Read On! Edwards' Violence against Women

Delighted to take note of Violence against Women under International Human Rights Law, a 2011 Cambridge University Press monograph written by an IntLawGrrls contributor, Dr. Alice Edwards (below left).
In her preface, Alice explains how her work for UNHCR, the Office of the U.N. High Commissioner for Refugees in the 1990s inspired the study. Stationed in Sarajevo, she worked with women survivors of the armed conflict in Bosnia and Kovoso. Law posed a challenge, for the then-existing framework did not immediately recognize the women as "refugees" entitled to resettlement and other protections. 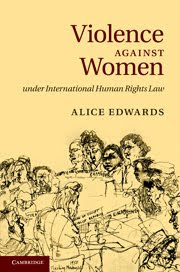 This book expands on that experience, looking as well at institutions of international human rights and international criminal law. (image credit) Chapter titles include "Feminist theories on international law and human rights," "The international human rights treaty system: practice and procedure," "Equality and non-discrimination on the basis of sex," "Torture and other cruel, inhuman, or degrading treatment and punishment," "The right to life," and "Strategising next steps: treaty body reform and towards humanising women."
Violence against Women is a revision of Alice's doctoral thesis, completed while she was an Oxford lecturer; Alice since has returned to Geneva headquarters of UNHCR, where she's the Senior Legal Coordinator and Head of its Protection Policy and Legal Advice Section, Division of International Protection. In her preface, Alice writes (p. xi):

Drawing on feminist theories of international law, this book critically examines how women's lives, particularly the violence they face, have been understood and responded to in international human rights jurisprudence.

Alice explains (p. xii) that her book goes beyond devising strategies to use to the law to women's advantage:

I take a step away from being the 'black letter' lawyer, and towards being a critical theorist. I am interested here in what these strategic choices actually mean for women -- conceptually, structurally, and procedurally. The study is confronted, time and again, by the ultimate paradox of international human rights law and these so-called inclusion or 'gender mainstreaming' strategies for women: that the more that women work within the structures of existing law and institutions, the more the power and sexual inequalities inherent in the system can be reinforced.