Somewhat lost in last month's holiday shuffle was the release of the United States National Action Plan on Women, Peace, and Security. 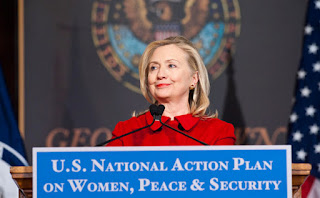 Motivated by U.N. Security Council Resolution 1325 (2000) on Women and Peace and Security, and launched by U.S. Secretary of State Hillary Clinton in a speech at Georgetown (right), the plan sets forth goals and means for implementation. (photo credit)
Guiding principles:
► Further enable women to be not only beneficiaries, but also "agents of peace and stability";
► Address differences and inequalities between the roles of men and women, building on gender integration goals set out in the U.S. National Security Strategy and the 2010 Quadrennial Development Review (prior post);
► Include various stakeholders, "women and girls, men and boys, and members of marginalized groups" in the Plan's implementation;
► Coordinate among the many pertinent national agencies, among them the Departments of State, Defense, Justice, Treasury, and Homeland Security, the White House National Security Staff, the Agency for International Development, the Centers for Disease Control, the armed forces, and the Office of the U.S. Trade Representative; and
► Invite civil society -- that is, all of us -- to hold those agencies accountable for full and proper implementation.
Much of the data in the 25-page document will be familiar to IntLawGrrls readers; for example, that inclusion of women in peace negotiations enhances consideration of economic and social justice issues, or that education of girls enhances longterm prosperity and stability.
That women often "have found themselves sidelined" in official peace talks also is well known. This sentence, on page 5 of the U.S. National Action Plan, nonetheless jolts:

'While the number of women heading UN field missions has increased, the UN has never appointed a woman as a lead mediator.'

What's most significant about the report is its authorship: the United States government, from the President (via Executive Order) on down, joins numerous other countries in committing itself to work for change around the world.
Looking forward to keeping account of implementation over the long term -- after 1st looking, in a post tomorrow, at one curious aspect of this laudable effort.
by Diane Marie Amann at 7:00 AM