Ecuador 'is one of the countries that are easier to pick on – you're not going to see judges pick on French or British judgments.'

So explains Professor Montré D. Carodine (left) of Alabama Law (prior post), in "The Tort Heard Round the World," the cover story in this month's California Lawyer. (photo credit) Her quote concerns treatment of Ecuadorean judgments by U.S. courts.
The matter's of issue due to the ongoing dispute between Chevron and plaintiffs in Ecuador who've suffered on account of environmental degradation. (Prior IntLawGrrls posts on aspects of this dispute are here and here.) In the California Lawyer story, reporter Lawrence Hurley gives an excellent review of each side's lawyerly tactics and strategies, some of them quite acrimonious.
A national judge ruled against Chevron a while back, giving rise to challenges in multiple forums in multiple countries – not the least, the United States, where depositions pursuant to 28 U.S.C. § 1782 have exposed internal workings of civil litigation practice. The case is among the most prominent brought against corporations pursuant to the Alien Tort Statute. (Another of those cases is, of course, Kiobel, set for oral argument before the U.S. Supreme Court a week from tomorrow, February 28 (prior posts available here).)
A sidebar on such litigation quotes criticism of Alien Tort litigation by IntLawGrrls contributor Lisa S. Blatt (below left; credit), a partner at the D.C. law firm of Arnold & Porter, who contended:

'This is a statute that has been absolutely perverted, where a district court has become a world court.'

You can learn the very latest on the dispute at next month's annual meeting of the American Society of International Law – a session entitled The Chevron-Ecuador Dispute: A Paradigm of Complexity is set for 2:15-3:45 p.m. Friday, March 30, 2012. 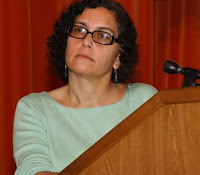 Scheduled to speak are CUNY Political Science Professor Judith Kimerling (right), who won the 2011 Albertson Medal in Sustainable Development "for her defense of the Amazon rainforest and the human communities that depend on it for their culture and survival" (photo credit); Lucinda A. Low, partner and head of the International Department of the D.C. law firm Steptoe & Johnson, and George Washington University Law Professor Ralph Steinhardt.
by Diane Marie Amann at 6:10 AM