Day 1 at the U.N. Commission on Status of Women

Monday marked the beginning of the 56th session of the Commission on the Status of Women – CSW56 – at the United Nations Headquarters in New York City. This year’s priority theme is the empowerment of rural women and women's role in the eradication of poverty and hunger, in development, and in other current challenges. This theme seems more relevant than ever, now that the world’s population has exceeded 7 billion and is expected to reach 9 billion by the year 2050.
Rural women make up one-fourth of the population.

The Honorable Marjon V. Kamara (left), Ambassador Extraordinary and Plenipotentiary of the Republic of Liberia to the United Nations and the Chair of CSW56, opened the session in the General Assembly Hall with the delegates from the member states of the United Nations and representatives and observers from national, regional, and local organizations in attendance. During her opening statement, Kamara emphasized that:
► Much normative work on gender equality remains to be done in the political realm at the international level, and
► Actual implementation at the national level is also a major task.
This includes bridging the gap between the promises made at the international level and their implementation at the national level; thus, the real work begins after CSW56, when the delegates return to their home countries.
Furthermore, Kamara stated that the goal of gender equality is not a task to be undertaken only by women. Rather, it is the responsibility of society as a whole to work towards achieving this goal. 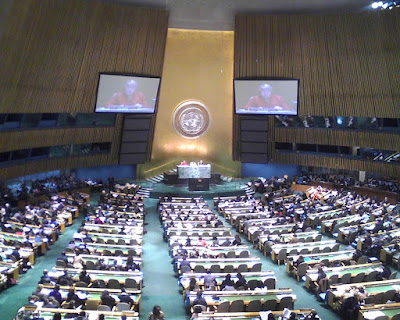 We also had the honor of hearing from Michelle Bachelet (right). As IntLawGrrls have posted, she is the first Under-Secretary-General and Executive Director of UN Women, as well as the former President of Chile.
Bachelet stressed that the session’s priority theme is pressing, as it includes issues relating to human rights, equality, and justice for a quarter of the world’s population; furthermore, empowering rural women is not just good for women, but advances the interests of all members of society.
Although they are often overlooked, rural women are actually on the front lines of many pressing global issues, such as climate change and its effects on agriculture. The Arab Spring and other such movements have also shown us that we must open up the political process to all members of society, especially rural women. (Prior IntLawGrrls posts.) Strides have been made, and more women now work and participate in politics at the international, national, and local level, but this is not enough, as rural women also need economic independence.
In this realm, Bachelet noted, rural women have seen less progress. For example, women farmers receive only 5 percent of agricultural extension services. Beachelet also quoted a rural woman who had expressed another challenge:

"'When the land is in my husband’s name, I’m only a worker. When it is in my name, I have some position in society.'"

One especially interesting point raised by Bachelet was the important role a cell phone can play in the life of a rural woman, as it is a means to acquire services and carry out business. A recent study showed that 41 percent of women reported an increase in income and professional opportunities because of their cell phones. Ultimately, in order to achieve economic independence, rural women need better access to basic infrastructure and technology.
Bachelet concluded by stating:

'I know that equality is possible. It will take time. It will take our concerted and collective effort. But I am convinced that if we put our energies into empowering women and advancing gender equality, we will create a new and better future.'

As both Kamara and Bachelet emphasized in launching CSW56, much work lies ahead. After this encouraging start, the delegations, observers, and attendees moved on to smaller group discussions, roundtables, and panels, to get on with that important work.
by Lauren McIntosh at 7:21 PM