'By using their initiative power to target a minority group and withdraw a right that it possessed, without a legitimate reason for doing so, the people of California violated the Equal Protection Clause. 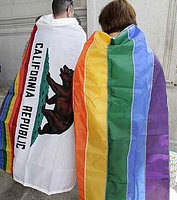 We hold Proposition 8 to be unconstitutional on this ground.
'We do not doubt the importance of the more general questions presented to us concerning the rights of same-sex couples to marry nor do we doubt that these questions will likely be resolved in other states, and for the nation as a whole, by other courts. For now, it suffices to conclude that the People of California may not, consistent with the Federal Constitution, add to their state constitution a provision that has no more practical effect than to strip gays and lesbians of their right to use the official designation that the State and society give to committed relationships, thereby adversely affecting the status and dignity of the members of a disfavored class.'

-- Judge Stephen Reinhardt, in his opinion for the majority of the U.S. Court of Appeals for the 9th Circuit, which today outlawed, as violative of the U.S. Constitution, the California initiative banning same-sex marriage. One member of the 3-judge panel dissented from this holding.The 100-plus-page opinion is here. Analysis by SCOTUSBlog's Lyle Denniston is here. IntLawGrrls' prior posts on this issue are available in our series of California posts, here. (photo credit)
The case is destined for further review – perhaps 1st for a 9th Circuit en banc hearing, but eventually, and most surely, for a hearing before the U.S. Supreme Court.
by Diane Marie Amann at 2:51 PM