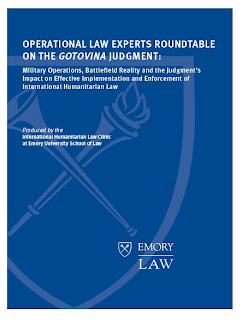 The International Humanitarian Law Clinic at Emory Law School, for which I serve as Director, has issued a report based on a meeting of military operational law experts with extraordinary breadth and depth of experience in applying and enforcing international humanitarian law (IHL).
The meeting was convened last November 4 to analyze the broader legal issues in and implications of the judgment of Trial Chamber I of the International Criminal Tribunal for the former Yugoslavia in the case of Prosecutor v. Gotovina (April 15, 2011). As detailed in prior IntLawGrrls posts here and here, the judgment focused on Operation Storm, the Croatian operation to re-take the Kraijina region in the summer of 1995.
The Trial Chamber convicted Croatian General Ante Gotovina of war crimes and crimes against humanity on a joint criminal enterprise theory of liability, and sentenced him to 24 years confinement. The ruling rests on two Trial Chamber findings:
► First, that Gotovina ordered an unlawful direct attack by placing “civilian areas” under attack. Although the Trial Chamber found that less than 5% of all artillery and rocket effects were not attributed to lawful targets, it relied on these effects to conclude that Gotovina acted with the intent to deliberately attack civilians.
► Second, that using artillery to attack the building where the enemy's President and supreme military commander resided was a disproportionate use of force, even though there was no evidence of civilian casualties as a result of the attack.
The judgment thus poses challenging questions about the application of IHL to complex targeting decisions involving the use of artillery against a range of military objectives in populated areas during a sustained assault.
The Atlanta meeting grew out of extensive conversations with a range of US and foreign military operational law experts about the application of IHL in the Gotovina judgment. These issues are at the heart of a brief that has been submitted to the Appeals Chamber at the ICTY – that amicus brief will be the subject of my post tomorrow.
Beyond the amicus brief, however, we felt it was essential to explore in greater depth a broader range of legal, institutional, and policy concerns – in particular, the consequences of the judgment’s approach on future military operations, military planning, and the implementation of IHL.
The experts gathered represented a remarkable compilation of military legal and operational experience, with regard not only to the implementation of IHL during the conduct of operations, but also to the broader institutional considerations of training, planning, and doctrine that contribute significantly to the development and maintenance of disciplined and moral fighting force. This operational experience and knowledge brought the concepts at the heart of IHL – and the issues at the heart of the discussion over the Gotovina judgment – into sharp relief.
The report just issued by the Emory IHL Clinic is entitled Operational Law Experts Roundtable on the Gotovina Judgment: Military Operations, Battlefield Reality and the Judgment’s Impact on Effective Implementation and Enforcement of International Humanitarian Law. It sets forth the experts’ consensus views and concerns regarding the application of the law in the judgment, highlighting four key areas:
► Imposition of what amounts to a strict liability standard imposed on commanders who attack lawful military objectives in populated areas;
► Flawed application of the principle of proportionality;
► Failure to consider or apply Article 58(b) of Protocol Additional to the Geneva Conventions of 12 August 1949, and relating to the Protection of Victims of International Armed Conflicts, which imposes on defending parties obligations to take precautions; and
► Failure to properly recognize and rest the legal analysis on the operational complexity inherent in the targeting process.
With an eye to the long-term consequences of the judgment, the report also emphasizes a range of institutional concerns and second-order effects resulting from the judgment:
► Effect on future military operations;
► Consequences for the respect for and development of international law; and
► Specific overarching concerns regarding the role of the commander and the role of legal advisers during military operations.
by Laurie Blank at 7:27 AM

Although I have yet to read the report all the way through, I have no doubt that the experts get the law right. Still, I have to ask the cynical question: if Gotovina was a Serb, would this roundtable have ever been held?

Mr. Heller, you really believe that people sit around and say, "This decision of the ICTY is terrible, but the defendant is a Serb so let's keep quiet"? Which of the participants at the Emory conference do you believe has such anti-Serb bias?